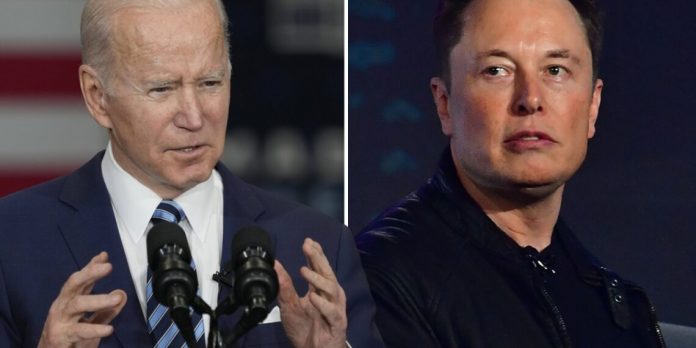 On February 9th the President finally acknowledged Tesla. And on February 16th Tesla CEO Elon Musk reminded him again that the electric carmaker is the most American-made EV.

It took digital ads in Times Square, an online petition signed by over 50,000 people, and constant pressure by Musk and his followers. But finally, Joe Biden did “Just Say It.”

He said the word, Tesla. And Elon Musk wants to make sure that Biden is paying attention.

Until Biden said Tesla, he had maintained an unusual and maybe unprecedented war with Tesla. They weren’t invited to the EV Summit at the Whitehouse in 2021. And other carmakers like Ford and GM were getting Federal incentives not offered to Tesla.

The irony is that Tesla is ramping up production in the US. And surpasses the other companies, by a lot, when it comes to building an American-made EV.

Tesla the most American-made EV

Biden has finally acknowledged Tesla is the US’s largest electric vehicle manufacturer. And Elon Musk wants him to understand that everything Biden is promising Tesla is already delivering.

The Tesla billionaire tweeted saying: “Model 3 is literally the most made in America car in – well of course – America.”

No one can remember a time when an American President has dismissed a major American business. And even offered his competitors federal money and incentives to sink the company.

But there has never been a CEO like Elon Musk. He is not afraid of the challenge. And he’s not going away.