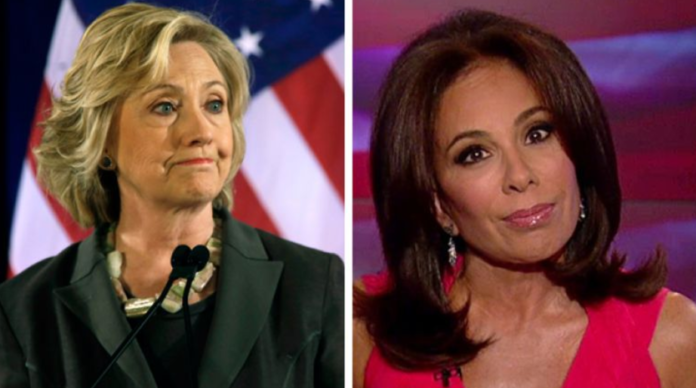 More and more Americans are tiring of Hillary Clinton and her pathetic excuses for losing the 2016 election. Last night, Judge Jeanine delivered an epic Hillary Clinton takedown on her Fox News opening statements, as noted by Breitbart News. In all fairness, Clinton had it coming to her. She is the first candidate in the history of American politics to throw such an obscene temper tantrum.

The takedown of Clinton reads as follows:

“You lost because people don’t like you. They don’t trust you. You’re arrogant and condescending. You call them names like ‘deplorable.’ And you have the moral core of a jellyfish. And you wonder why your accomplishments aren’t recognized. Your state department lied and said there were no emails on Benghazi.”

“You out and out lied that there was no classified information on your email server, and you did it for convenience when we all know you set up a private non-secure you and your girlfriends Uma and Cheryl, allegedly doing state department work, could raise money for the organized criminal end prize known as the Clinton Foundation, which was nothing more than a campaign slush fund allowing you to take money from foreign governments and live a life to which government employees are unaccustomed.”

“Hillary should not get a free pass because she lost an election. Her reign was one of bold, brazen, in your face pay-to-play corruption. It’s time to stop this psychopath from continuing her non-stop stream of lies and criminal activity.”

At some point, our chickens come home to roost. For Clinton, that happened in the form of her losing an election that many people believed she would win.

Furthermore, Judge Jeanine’s assessment of Clinton and her corruption is 100% accurate. Clinton is her own worst enemy and she’s too blind to realize it. Clinton also subscribed to the false notion that the Presidency belonged to her. After reality shattered her illusion, Clinton’s ego couldn’t take it.

Now she is making an utter fool of herself by traveling across the nation, selling an asinine book full of excuses for why millions of Americans voted against her. Judge Jeanine hit the nail on the hammer. Considering Clinton’s imperious attitude, multiple displays of horrific judgement, and outright theft, no wonder she didn’t win the election!

In fact, Clinton should be thankful that all she did was lose a Presidential election. As Judge Jeanine noted, Clinton is a criminal and belongs in a jail cell. However, when you’re an elite Democrat like Clinton, you can afford to bribe, blackmail, or pay off all the people who could possibly prosecute you.

The words of the amazing Judge Jeanine deeply resonate with countless Americans. If Clinton truly wants to know “What Happened,” she should take a good, long look in the mirror.