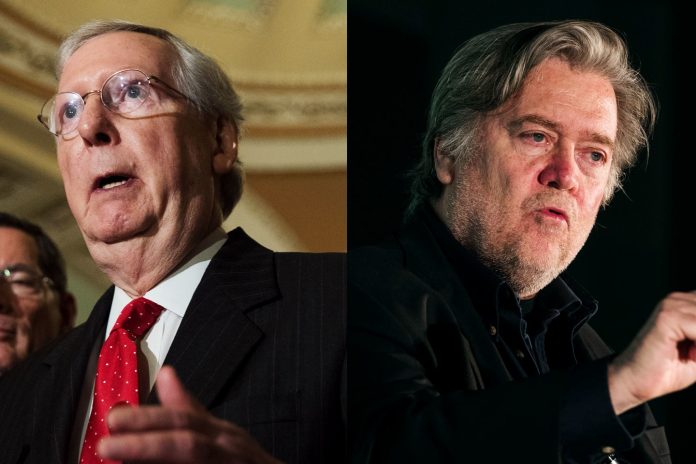 The dust has settled in Alabama, and for the GOP, the unthinkable has happened. A Democrat has been elected to Senate in one of reddest states in the Union. In the end, Roy Moore couldn’t overcome numerous accusations of child molestation, regardless of hist staunch denials.

The special election for Jeff Session’s vacated seat put certain wings of the GOP at odds with each other. Steve Bannon, Trump’s ousted special advisor, had taken the mantle of anti-establishment Republicanism. Bannon’s vision was to threaten primaries on Republican incumbents who didn’t march to Trump’s orders. Roy Moore’s campaign was Bannon’s first attempt of sorts since leaving the West Wing.

After Tuesday night, however, Bannon might be feeling the weight as Mitch McConnell will surely tie this loss around his neck. In the meantime, the Bannon and McConnell camps will pile blame on each other.

It’s hard to tell where Bannon goes from here. GOP party leaders should understand now the necessity of having a non-polarizing candidate. This loss unquestionably diminishes Bannon’s credibility as a political genius.

“Team Mitch did everything in their power to endanger our majority in the Senate and threaten the passage of the Trump agenda by ensuring the outcome that we saw last night.”

According to insiders, McConnell made it his goal to destroy Bannon politically. Bannon’s presence during the 2018 midterm elections is out of the question for McConnell.

By some accounts, according to Politico, many GOP insiders are breathing a sigh of relief in Moore’s defeat. Many Republican Senators no doubt would have been apprehensive about working with him.

President Trump had more of a tame reaction to Moore’s defeat. The President argued on Twitter that he never expected Moore to win. “I was right!” he wrote. This is of course ironic considering the President vocally supported Moore close the election. He urged voters on Twitter to elect him.