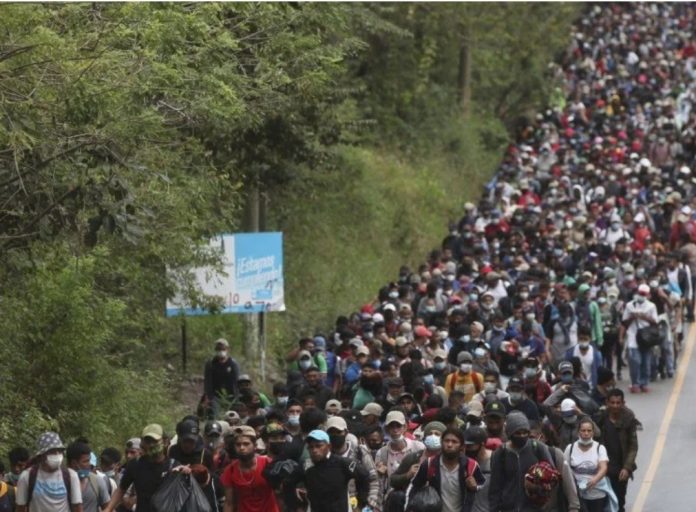 Recent policy changes by President Joe Biden regarding immigration enforcement are willfully undermining limits and policy. These executive orders appear to be sabotaging the nation’s self-determination and financial health.

President Biden’s move to drastically expand refugee immigration caps, as surveys revealed Wednesday, has been his most unpopular executive order to date. According to the Politico poll, just under half (48%) of all reregistered voters surveyed ‘strongly or somewhat oppose’ the president’s refugee plan; 14% of those surveyed had no opinion.

What the Pollsters said

“A new Morning Consult/Politico survey shows 48 percent of voters oppose Biden’s plan to allow as many as 125,000 refugees to seek safe haven in the United States during the upcoming fiscal year — a historic high that represents a whiplash change from the historically low 15,000-person limit for the current fiscal year — and fewer than 2 in 5 voters support it.”

The change between former President Trump’s refugee admission levels for FY 2021 and the increases Biden has proposed for FY 2022 shows more than 8 times this years limits.

Of 28 executive actions tracked by the pollsters since Biden’s inauguration on January 20, the February 4 order to increase the refugee admissions cap is the least popular “by a wide margin,” the pollsters found.

“Orders pertaining to immigration and immigrant rights constitute five of [Biden’s] seven least popular actions among voters and are particularly animating for Republicans,” they added.

While the opposition comes mostly from registered Republicans and Independents, there was still a 39% of Democrats not in favor of this aggressive expansion.

The current 2021 limit of 15,000 refugee admissions ceiling was takes into consideration the backlog of over 1.1 million asylum-seekers still waiting adjudication, as well as accounting for the arrival of refugees delayed resettlement due to COVID-19.

With many government services still with skeleton staffs or offices being closed due to the pandemic, even Biden’s State Department acknowledged that the “125,000-person limit for next year was an ambitious target.”

No Clear Plan in Sight

At present, there is no publicized plan to help process the currently backlogged asylum claims. Many are concerned that Biden has not attempted to limit refugee admissions long enough to ensure those presently in the country are safe. By limiting entry, the U.S. Citizenship and Immigration Services (USCIS) would be able to expedite due process for current refugees which they are afforded under asylum claimant policies.

By allowing an ever-increasing number of people in, and an unknown amount of asylum seekers in addition to that, it seems no forethought has been given to how this could overwhelm the economic, medical, or educational systems.

Breitbart reported, “On top of this, his demands to accelerate citizenship and reward lawbreaking with an 11-20 million person amnesty program creates yet another downstream crisis. Giving amnesty to over 10 million people means you are creating a downstream demand for 25 to 30 million more relatives, as numbers and backlogs create more and more pressure to admit more and more people. Launching this at a time of evaporating social trust and a decrepit infrastructure is to truly sink our national prospects long term.”

“Maybe Biden’s base wanted him off the wall along the border, but his whole approach is proving to be off the wall, as cartels gear back up for a busy spring season. Yielding to the radical wing of his base, however, will come at enormous cost to the nation and even to his own political standing.  He and his party will be absorbing all the political fallout from caravans at the border, increases in violent crime at the hands of criminal aliens, and the needless damage to American workers generated at a time of stagnant wage and economic growth.”

The unfortunate fact is, there are millions of people waiting patiently for their claims to be processed and for them to begin the process of naturalization. A plan must be put in action for those currently here – by continuing to increase numbers, all Americans and hopeful Americans will feel the crushing effects of the increasing masses of unsupported individuals. Biden seems to be looking for the tipping point.