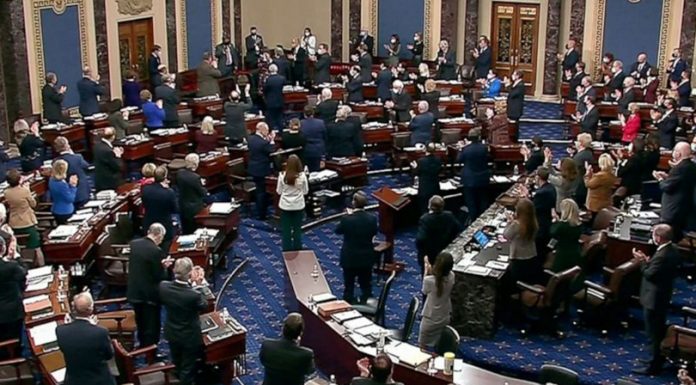 The Senate has voted to call witnesses in the impeachment trial of former President Donald Trump, delaying the end of the trial.

The Republicans who voted with Democrats to call for witnesses are Sens. Lisa Murkowski of Alaska, Susan Collins of Maine, Mitt Romney of Utah, Ben Sasse of Nebraska and, surprisingly, Lindsey Graham of South Carolina.

It was a surprise decision by Democrat House impeachment managers that was not even discussed with Senate Democrats, CNN reported.

The call for witnesses came after Rep. Jaime Herrera announced on Friday night that remembered a phone call had by House Minority Leader Rep. Kevin McCarthy and former President Donald Trump in which, she said, the former president sided with the rioters, The New York Post reported.

The word is that on the phone call the former president insisted that it was Antifa who was rioting at the Capitol, but when Rep. McCarthy informed him that it was his supporters who were rioting, Trump allegedly said “Well, Kevin, I guess these people are more upset about the election than you are.”

“In my January 12 statement in support of the article of impeachment, I referenced a conversation House Minority Leader Kevin McCarthy relayed to me that he’d had with President Trump while the January 6 attack was ongoing. Here are the details,” she said.

“When McCarthy finally reached the president on January 6 and asked him to publicly and forcefully call off the riot, the president initially repeated the falsehood that it was antifa that had breached the Capitol. McCarthy refuted that and told the president that these were Trump supporters. That’s when, according to McCarthy, the president said: ‘Well, Kevin, I guess these people are more upset about the election than you are.’

“Since I publicly announced my decision to vote for impeachment, I have shared these details in countless conversations with constituents and colleagues, and multiple times through the media and other public forums.

“I told it to the Daily News of Longview on January 17. I’ve shared it with local county Republican executive board members, as well as other constituents who ask me to explain my vote. I shared it with thousands of residents on my telephone town hall on February 8.

Trump lead attorney Michael van der Veen was furious with the Democrats, and some Republicans, decision to call for witnesses.

“I’m gonna slap subpoenas on a good number of people if witnesses are what is required here for them to try to get their case back in order,” the attorney said.