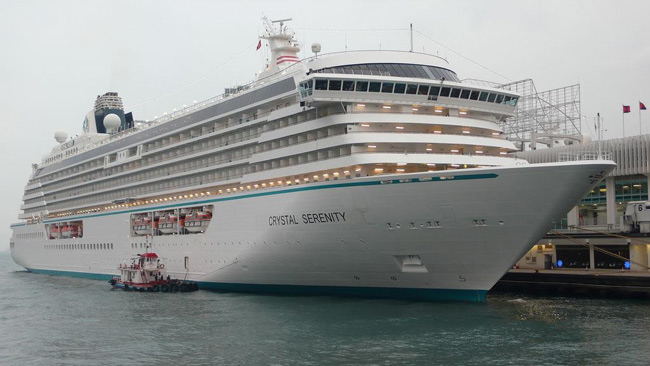 US Marshals seized the Crystal Serenity and Crystal Symphony luxury ships owned by Crystal Cruises. Hundreds of passengers were booted off the ships in Bimini, as the Feds commandeered the vessels.

The allegation is that $4.6 million in fuel bills had not been paid. It was fuel supplier Peninsula Petroleum Far East that filed a complaint in Florida last month. They obtained an “arrest warrant” against the cruise ships.

According to the Daily Mail under US admiralty law, the ships were literally “arrested.” The warrant was signed by US federal district court judge Darrin Gayles.

It is still questionable how US officials had the authority to seize the luxury ships when they were docked in the Bahamas, according to Cruise Law News.

Panic and chaos among passengers

When the passengers of the Serenity and Symphony were kicked off their ships in Bimini Passengers dealt with a chaotic scene. The luggage was everywhere. Some of the displaced cruisers were older. And passengers claim that there was no assistance from the crew.

Many of those on board had tickets to cruise on to California. They were all ferried to Fort Lauderdale. And amidst the chaos and panic, many of them were left to fend for themselves.

“Five hours in, we get off the ferry only to find all the luggage dumped everywhere, colors and numbers NOT together, luggage falling down, no porters and NO CRYSTAL REPS. NONE,” Serenity passenger Allyn Jaffrey Shulman wrote on Facebook. “No one giving instructions. No one helping the older folks. It was a shameful sight.”

A third ship, the Crystal Endeavor, was held in Ushuaia, Argentina. They were forced off the line’s most luxurious ship on Friday afternoon. And allowed to return to the ship on Saturday. They then set sail again headed to Uruguay.

Genting Hong Kong filed a petition over two weeks ago to wind up its business. They say the COVID-19 pandemic has brought once-thriving cruise and resort businesses to bankruptcy. Lim Kok Thay, who owns other businesses resigned as CEO last week.

According to Crystal Cruises spokesman Vance Gulliksen, ‘We are unable to comment on pending legal matters at this time. Crystal Serenity and Crystal Symphony’s voyages ended last month and there are no guests onboard.”

“The officers and crew on board are being well cared for and staying in single accommodations, some of which are guest staterooms. We are making sure they are comfortable and able to enjoy the various amenities on board. Crew members have been paid per their normal schedules and we are meeting and exceeding all contractual obligations.”