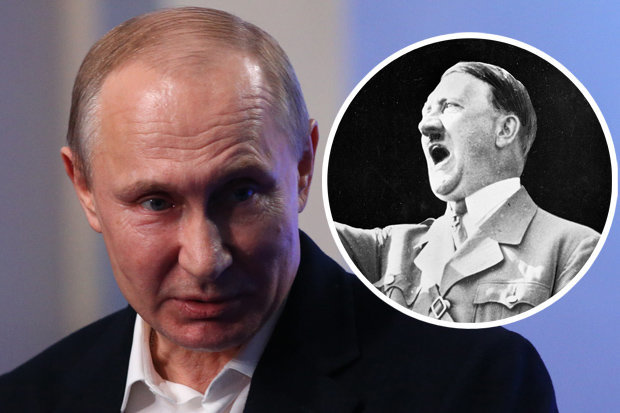 Vanda Obiedkova was born in Mariupol on Dec. 8, 1930. She was a Holocaust survivor who again came under siege by Russian forces. Her death in Mariupol was reported by her daughter Larissa, who made it to safety.

Vanda was a remarkable survivor of the Nazi’s war on Jewish civilians in 1941. And she died as a result of Putin’s war on Ukrainian civilians on April 4, 2022.

There is growing verifiable evidence that the Russian forces are committing atrocities, including genocide. And the US has “credible information” of Russians killing unarmed civilians trying to surrender.

This is the same city and the same population that Hitler attacked in World War II.

In another incredible irony, the Putin regime claims to be freeing the citizens from Nazis or protecting the Russian-speaking population. But the constant bombardment is no respecter of Putin’s supposed motives. And the people that are dying are just as likely to be Jewish and Russian-speaking Ukrainians.

Vanda was 10 years old when the Nazis entered Mariupol. And they immediately started rounding up the Jewish population. And the SS took away and killed Vanda’s mother, Maria along with the entire Mindel family.

The little girl was hiding in a basement when her mother was taken away. Her father, who was not Jewish also survived.

For the duration of the Nazi occupation, she was forced to go “underground” eventually taking refuge at a hospital where her father had her admitted.

In October 1941, the Germans executed between 9,000 and 16,000 Jews. And threw their bodies in ditches along the outskirts of Mariupol. This is the same area where Putin’s forces leave bodies in the street.

Mariupol was finally liberated in 1943. And Vanda Obiedkova gave an account of her life and Holocaust experience to the USC Shoah Foundation in 1998.

At 10 years old, Vanda Semyonovna Obiedkova survived the Germans by hiding in a basement in Mariupol.
81 years later, she died in a basement in the same city as a victim of the horrific war hiding from the Russians.

Mariupol was one of the first areas to get shelled and bombed during Putin’s invasion. Vanda’s family moved into the basement of a neighboring heating-supply store. The only assistance the family received for a month came from Rabbi Cohen’s synagogue and community center.

“There was no water, no electricity, no heat—and it was unbearably cold,” Larissa described the conditions. She had to care for her immobile mother, but “there was nothing we could do for her. We were living like animals!”

Two snipers set up positions near the closest sources of water. Every trip for water was dangerous. Snipers and bombs were a daily occurrence.

“Every time a bomb fell, the entire building shook. My mother kept saying she didn’t remember anything like this during the Great Patriotic War (World War II).”

She was a Holocaust survivor who thought seen the worst in humanity, as a child. But the Russian forces are showing the world a new evil.

Vanda was half-starved and bedridden. She lived in fear of the constant nearby bombing. And the family’s house was destroyed while they hid in the basement. When Vanda died the family was able to escape. With the help of Rabbi Cohen’s synagogue and community center, they were able to leave the city.

Mariupol was destroyed, many casualties

Ukraine soldiers have been courageous against overwhelming odds in Mariupol, and weeks ago Russia issued a surrender-or-die demand. Zelensky has named it a “Hero City.”

Most of the citizens which include Jewish and Russian-speaking people have scattered to other countries, looking for refuge from Putin’s invasion. And those that remain are hiding in basements, since hospitals are being bombed.

The world watches as a madman ravages Ukraine, because he can.

In October 1941, the Germans executed between 9,000 and 16,000 Jews. And threw their bodies in ditches along the outskirts of Mariupol.

The dead have yet to be fully counted in today’s Mariupol. But many will be found, in the same areas, and on the same streets, where Hitler’s forces left a bloody trail 80 years ago.