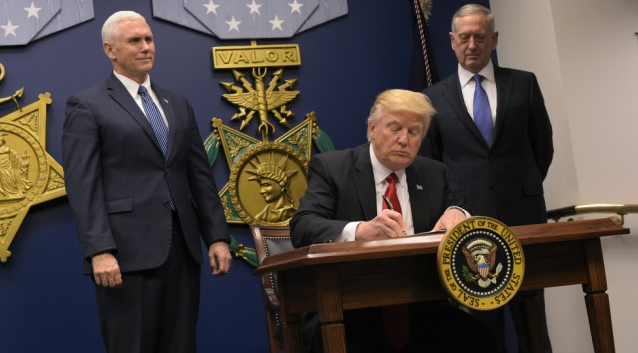 A new Rasmussen poll came out and stated that the majority of middle class Americans are in favor of President Trump’s travel ban. Despite the propaganda from the mainstream media, voters perceive the travel ban as a measure against terrorism and not as a tool of religious discrimination against Muslims. The President’s ban will halt travel from countries that are linked to terrorism until American officials can instate effective vetting measures to shield the people of this nation from harm. Radical liberals have repeatedly pushed the flawed narrative that open borders and compassion will serve as a solution to acts of terrorism. Thankfully, most voters are able to realize the dangers that come along with naively allowing anyone to emigrate into the United States.

The truth of the matter is this: a travel ban is critical to ensure the safety and security of the American people. Countries like Iraq, Syria, Iran, Libya, Somalia, Sudan and Yemen are plagued with people who would love nothing more than to come to America and murder countless innocent people. As this nation’s leader, President Trump has a duty to protect the people; the social justice warriors and other left wing activists who attempt to block his ban are simply campaigning for the deaths of law-abiding citizens. They are either too naive, unaware, or stupid to realize it. The liberals in America need to wake up and get smart. Shielding the nation from potential harm should be a bipartisan matter; liberals and conservatives alike should be supporting the travel ban until government officials are able to properly vet the people who are visiting or emigrating to America.

Following the tragedy of the suicide bombing in Manchester, England, a new study came out stating that 77% of Americans think a similar assault could occur on this nation’s soil within the next 12 months. 36% believe that an attack is “very likely.” Each and every travel ban critic needs to understand that if they somehow succeed in shutting down the President’s bill and terrorism rears its ugly head, the blood will be on their hands.

In many cases, there is a fine line between humble compassion and sheer stupidity; radical left wingers have fundamentally crossed that line. In essence, their argument is that placing American lives at risk is better than hurting the feelings of people coming from countries that have flagrantly expressed their desire to commit acts of terrorism. Democrats use buzzwords like “bigotry” and “xenophobia,” but they are advocating to leave room for lawlessness and murder. This cannot stand.

Despite the radical liberals that reside in this nation, there are still many people who value and cherish American lives. This has been evidenced in the latest Rasmussen poll. This nation is so fortunate to have a President who will work tirelessly (even if that entails battling those who wish to sabotage him) to preserve, cherish, and defend human lives. President Trump’s travel ban will serve as a necessary and temporary course of action until government leaders have found an effective way of vetting those who enter this country. This decision will place American interests first and save countless lives.

Thank you Mr. President for all that you do.