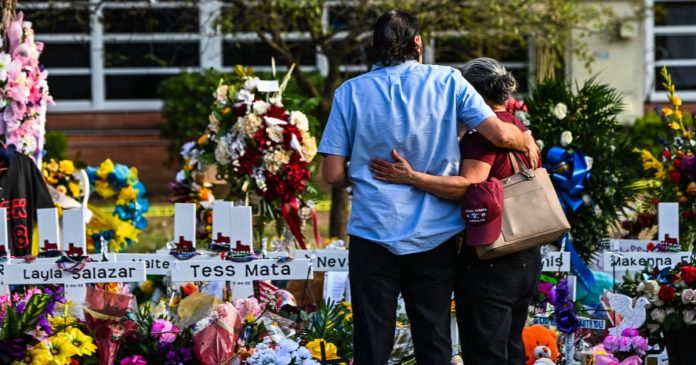 Colonel Steven C. McCraw, director of the Texas Department of Public Safety has said that the police response, a 77-minute delay, was the “wrong decision.” An investigation into Texas’ deadliest school shooting that killed 19 children and two teachers is underway. And so far, no one is praising the police action surrounding the May 24th tragedy.

Cody Briseno and his co-worker were the first to encounter the gunman outside Robb Elementary. The pair worked at Hillcrest Memorial Funeral Home across the street from the school.

The gunmen opened fire and they fled to the Funeral Home. They called the police. And Briseno called his wife and asked her to bring his gun.

Then the staff at Hillcrest watched the man shoot into the windows of the school from the outside.

With a gun in hand, Briseno tried to cross the street to stop the madman. But the police told him to stay back. And wouldn’t allow him to approach the school.

In an NBC interview, Briseno explained how several of the murdered students including his young cousin had services at Hillcrest. And as he helped lower each casket into the ground he wondered if he could have done more.

“It always plays in my head,” he said.

Angeli Rose Gomez is a Uvalde mom whose children were inside the besieged school. She’s a farm worker who had been at the school that morning for her child’s graduation ceremony. She received a frantic call from her mother and sped back to the school.

“Right away, as I parked, a US Marshal started coming toward my car, saying that I wasn’t allowed to be parked there,” she recalled. “And he said, Well, we’re gonna have to arrest you because you’re being very uncooperative.”

By the time she got to Robb, Elementary parents were gathering.

Intermittent shots echoed from inside the school.  Most of those gathered were begging the police to go inside and confront the killer. And were willing to go themselves, if the police didn’t.

Gomez was one of the more vocal parents. She claims the police handcuffed her for a short period.

Cops from various agencies held other parents back as they tried to get into the school and begged the officers to do something. After a local officer convinced the marshal to remove the handcuffs, Gomez said, she bolted toward the school, jumping a fence to get inside.

And safely brought out her 2 sons.

Videos show a scene where over 50 officers from at least 3 agencies are holding parents back. In some cases, parents were pinned to the ground until they calmed down. And others say they were threatened with tasers.

The videos are difficult to watch. They show hysterical parents screaming to let them pass.  And begging the police to do something. If they police can’t go in the parents are willing. The parents want someone to save their children.

The last 911 call from a child locked in a room with the killer was at 12:15. Police from various agencies had been at the school since around 11:30.

A 9-year-old survivor of the massacre told his story. “When the cops came, the cop said: ‘Yell if you need help!’ And one of the persons in my class said ‘help.’ The guy overheard and he came in and shot her,” the boy said. “The cop barged into that classroom. The guy shot at the cop. And the cops started shooting.”

According to radio recordings, shots could still be heard at 12:52 pm. And at  1:06 pm, Uvalde police announced that the shooting was over.

Some parents were outside the school for about 77 minutes.