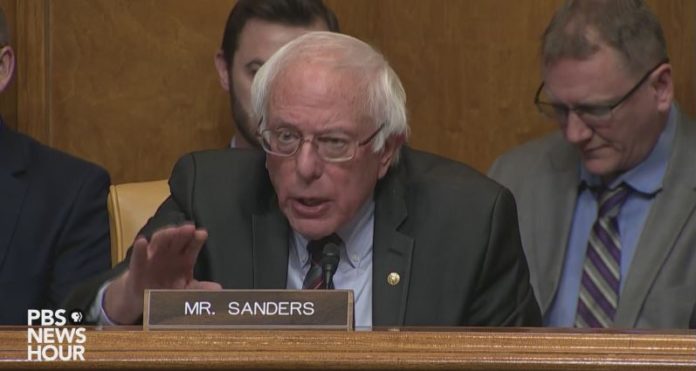 Sen Bernie Sanders (I-VT), current chairman of the Senate Budget Committee, invited Jeff Bezos to appear at an upcoming hearing. The Senator invited The CEO of Amazon to speak during an Income Inequality Hearing, slotted for March 17.

Sanders and other lawmakers have criticized Bezos for his his labor practices. For example, during the coronavirus pandemic, Bezos ended hazard pay for frontline workers. This is despite Amazon benefiting from the e-commerce boom as a result of the pandemic.

The Vermont Senator has been a consistent Amazon critic. Bernie Sanders has long brought to light the pay disparity between top execs and warehouse workers and delivery crews. Bezos went to a $15 per hour minimum wage after harsh criticism in 2018.

I have invited Jeff Bezos to testify in the Budget Committee next week to explain to the American people why he thinks it's appropriate for him to spend a whole lot of money denying economic dignity to workers at Amazon, while he has become $78 billion richer during the pandemic. https://t.co/EFOadKKJxH

“I have invited Jeff Bezos to testify in the Budget Committee next week to explain to the American people why he thinks it’s appropriate for him to spend a whole lot of money denying economic dignity to workers at Amazon, while he has become $78 billion richer during the pandemic,” Sen. Bernie Sanders tweeted.

An Amazon spokesperson provided a statement to CNBC saying, “We fully endorse Senator Sanders’ efforts to reduce income inequality with legislation to increase the federal minimum wage to $15 an hour for all workers, like we did for ours in 2018.”

Despite Sanders’ continual focus on Bezos, Amazon has been one of the few large corporations which has consistently supported the push for increased federal minimum wage.

In my view, we can no longer tolerate billionaires becoming obscenely rich at a time of unprecedented economic pain and suffering. The time has come to tax their wealth and break up tech giants and other huge conglomerates that have monopolized nearly every sector of our economy. https://t.co/FznA4son6e

Sen Bernie Sanders continued to angrily attack the mega-rich after Jeff Bezos refused to attend the hearing. He continued, “In my view, we can no longer tolerate billionaires becoming obscenely rich at a time of unprecedented economic suffering.”

The Vermont Senator, received some criticism from many middle class workers who are tired of the bark, without any movement to close up loopholes for the rich, including the Vermont Senator and his colleagues on Capital Hill.

Senator Sanders, I respectfully do not begrudge all ultra-rich citizens their fortune as long as the tax loop holes are sewn-up to the extent where our middle and lower class earners don't actually end up paying the bear's portion of federal taxes.

Sanders has often come under criticism for the various groups he will “tolerate”, while allegedly putting other corporations or groups under an intense microscope.

But you will tolerate Scientology having tax exempt status while going against rules laid down by IRS to ensure that status. You tolerate staff paid 50c an hour and many labour laws breached and a leader sitting on $3billion in cash. Seems you are very selective in toleration.

Many called for solutions rather than continually beating the emotional drum of wealth inequality. Sanders continues to target the same old names. Rather than simply barking about the rich, many constituents on both sides of the aisle want action.

But you surrender so easily to the billionaires, why should anyone believe you.

Unfortunately, these constituents recognize Congress will not correct this broken system. Career politicians would need to close the very tax loopholes of which they take full advantage, in order to truly help raise the lower and middle classes.

I edited for you. "In my view, we can no longer tolerate politicians becoming obscenely rich at a time of unprecedented economic pain and suffering. The time has come to tax their wealth."

Unfortunately, until the entire system is corrected, starting with wealthy career politicians, their corporate donors, and lobbyists, the middle and lower class will continue to shoulder the brunt of income inequality.