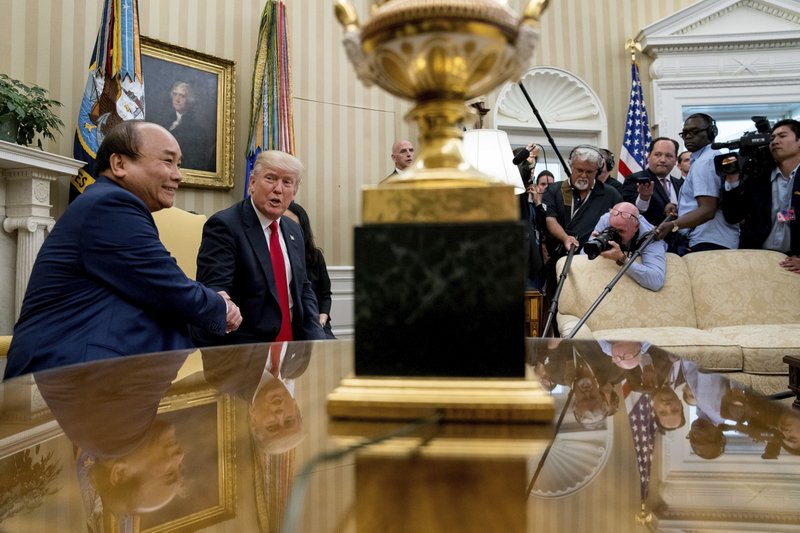 Prime Minister Nguyen Xuan Phuc is the first leader to visit the Trump White House from Southeast Asia, where the U.S. vies with China for influence. The two leaders said billions of dollars in U.S.-Vietnamese business deals were signed, but gave no details.

Their Oval Office meeting, however, was overshadowed by indications Trump will pull the United States out of a global climate agreement that commits nations to reducing carbon emissions. The World Bank has ranked Vietnam, whose population mostly lives in coastal areas and low-lying deltas, as one of five countries most likely to be affected by climate change.

Responding briefly to questions from reporters at the start of Wednesday’s meeting, Trump said he would decide on the Paris accord “very soon.”

The U.S. president is due to travel to Vietnam to attend an Asia-Pacific economic summit in November, which Phuc said would be an opportunity for the U.S. to assert its positive role in the region.

As the two leaders sat down for formal talks, which also touched on North Korea, Trump was quick to raise the trade imbalance.

“We have a major trade deficit with Vietnam, which will hopefully balance out in a short period of time. We expect to be able to do that,” Trump said. He added that Vietnam had made a “very large order” worth billions of dollars that would create jobs for the U.S.

Phuc said U.S.-Vietnam relations have “undergone significant upheaval but today we have been able to become comprehensive partners.” He said he has been impressed by Trump’s friendliness and openness and was confident bilateral cooperation would be enhanced.

A joint statement released later Wednesday said Phuc expressed interest in acquiring more defense equipment from the United States, including additional Coast Guard cutters. The two leaders also looked into the possibility of a visit to a Vietnamese port by a U.S. aircraft carrier and expanded cooperation between the two navies, it said.

The U.S. and Vietnam normalized ties in 1995, two decades after the Vietnam War’s end. Under President Barack Obama, diplomatic and security ties blossomed, as Vietnam sought ways to counter China’s island-building and vast claims to the disputed South China Sea.

But the relationship is now on uncertain ground.

Vietnam would have been a prime beneficiary of the 12-nation Trans-Pacific Partnership agreement negotiated under Obama. Within days of taking office, Trump withdrew the U.S. from the trade deal, saying it would hurt American workers.

Speaking at the Heritage Foundation think tank Wednesday, Phuc pushed back, saying that in trade, the U.S. and Vietnamese economies are “more complementary than competitive.” He said contracts for U.S. goods and services worth $15 billion were signed during his visit.

Security cooperation between the nations that were once enemies has grown because of shared concern over China’s assertive behavior in the South China Sea. The U.S. recently delivered six coastal patrol boats to Vietnam’s coast guard and a decommissioned Hamilton-class cutter.

He called for U.S.-China relations that are conducive to peace and stability and the interests of smaller nations.

“In Vietnam we have a saying that when the buffalos fight the flies may be hurt,” he said.