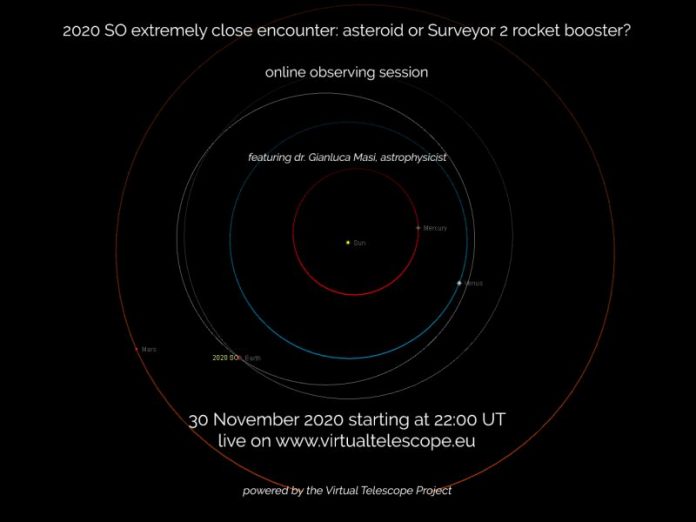 This week, skywatchers are getting treats, a partial eclipse of the Beaver full-moon on Monday, and the newly identified 1966 space artifact that will be passing close to Earth on Tuesday, December 1st.

The Near-Earth Object will be traveling an estimated 8,700 mph, getting as close as 31,000 miles from the Earth.

Initially, astronomers at Pan-STARRS believed it was a small asteroid when they spotted it using a NASA-funded survey telescope in September, The Minor Planet Center in Cambridge, Massachusetts called it 2020 SO based on the assumption that it is an asteroid orbiting the sun.

Scientists at the Center for Near-Earth Object Studies (CNEOS) at NASA’s Jet Propulsion Laboratory in Southern California noticed that 2020 SO was not behaving like a normal asteroid.

1966 space artifact is a blast from the past

The scientists noted that the orbit and size of 2020 SO suggested it was not an asteroid. After analysis of more than 170 detailed measurements of 2020 SO,  they confirmed that it had low-density. This means it was hollow and couldn’t be an asteroid.  All signs pointed to an Apollo-era mission rocket booster.

CNEOS Director Paul Chodas tracked the object’s orbit backward. He discovered 2020 SO had come somewhat close to Earth a few times over the decades. In 1966, it looked a lot like it originated from Earth.

Chodas now believes that 2020 SO is actually the Atlas-Centaur rocket, which launched the Surveyor 2 lunar lander. The uncrewed mission took off headed to the Moon on Sept. 20, 1966.

After lift-off, Surveyor 2 separated from the Atlas-Centaur upper-stage booster normally. But NASA lost control of the spacecraft when one of its thrusters didn’t ignite. On September 23, 1966, the lander crashed into the Moon near Copernicus crater.

In the meantime, the Centaur upper-stage rocket blasted right past the moon and began to orbit the sun.

This week was a close fly-by of 2020 SO (or the Atlas-Centaur) but it won’t be the last time it gets close to us. On Feb. 2 it will pass close by again. Then the hollow rocket will leave our orbit again in March 2021.