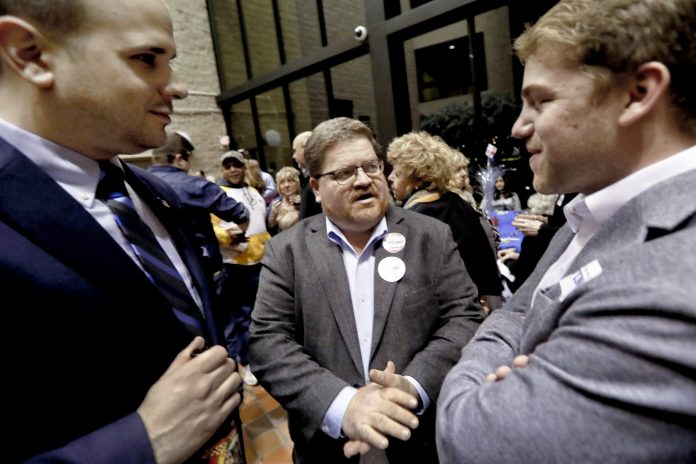 UPPER ST. CLAIR TOWNSHIP, Pa. (AP) — When he moved to Pennsylvania about five years ago, it was a coin toss which party Brian Heitman would register with.

Since Donald Trump’s election in 2016, Heitman, who is 42 and white, has become a reliable Democrat. Last week, he voted for the Democratic candidate in a special state Senate election in Pittsburgh’s affluent southern suburbs.

“A decade ago I probably wouldn’t have even noticed this election was happening,” Heitman said, “but I’m making a point in voting in every one I can nowadays.”

The Democrats’ 2020 presidential primary may feature a historically diverse field of women and minorities, but in some ways it is testing how the party appeals to white men such as Heitman. Many Democratic politicians went into the last presidential campaign cycle taking little account of those voters, and banked on a coalition of women and minorities to carry them to victory. Trump’s victory proved that thinking wrong. Many in the party are determined now not to make the mistake again.

That’s left Democrats wondering whether the nominee should be someone who can cut deep into Trump’s base, picking off large numbers of working-class whites, whether it’s enough to win over affluent, college-educated, suburban men and whether party is moving to far left to win them both.

“The white male vote is indispensable, it’s a part of any winning coalition,” said Democratic pollster Ronald Lester, who worked for Hillary Clinton’s campaign in 2016. He noted that successful national Democrats perform well with white men, and that includes Barack Obama, whose strength among white men in the Rust Belt helped fuel his White House victories in 2008 and 2012.

Several candidates have jumped in with their own suggestions of how to do that.

Former Vice President Joe Biden, who hasn’t said whether he is running, spoke to the International Brotherhood of Electrical Workers in an appearance Friday that seemed designed to show how he could win back white working-class voters. Biden said some of his “sophisticated friends” don’t understand the need to treat laborers with respect.

“How the hell do we get to the place where a lot of you think the rest of the country doesn’t see you, or know you?” Biden asked the mostly male crowd.

When Rep. Tim Ryan, D-Ohio, announced his campaign earlier in the week, he said his more centrist approach could appeal to working-class voters like those in his district, which embodies the Rust Belt terrain that Trump won.

Polling makes clear why Democratic are searching for the right messenger.

White men make up typically make up about one-third of the electorate. In 2018, 41 percent of them voted for Democrats, according to AP VoteCast, a survey of the national electorate. While Democrats’ strength among women won headlines and was often credited with Democrats’ strong showing, white men also moved to the Democrats column. VoteCast showed Democrats won the votes of 46% of white male college graduates, a figure that has given some in the party hope.

That shift is part of a long-term trend.

According to the American National Election Survey, white men without college degrees have consistently supported the GOP over the past two decades, while those with degrees — roughly one-fifth of the 2018 electorate — have increasingly moved toward Democrats. In 1996, when President Bill Clinton overwhelmingly won re-election, he only received 36% of the votes of white male college graduates, according to ANES. Hillary Clinton lost her race in 2016 but won 43% of them.

Strategists generally find that college-educated white men are more moved by social issues and Trump’s violations of political norms, while those without degrees are more concerned about economic issues and like candidates who may shake up the establishment. In Pennsylvania, Democrats have gained ground among both groups since Trump’s election, but some see the college-educated cohort as the most promising.

“The current coalition — urban, suburban women and these college-educated males — will likely put Pennsylvania back in the Democratic column,” said Mike Mikus, a veteran Democratic strategist who lives in the affluent suburbs of the 37th state Senate district.

Trump won the traditionally Republican district by 6 percentage points in 2016. But after its Republican state senator was elected to Congress in November, Democrats targeted the seat. They counted on flipping its educated populace of lawyers, consultants and doctors who fill its colonial-style houses and shopping centers that spill over the ridgelines outside Pittsburgh.

“There are college-educated men who have, at least temporarily, put their Republican Party membership card in their pocket for a while,” Mikus said of his neighbors. But, he warned, these new Democratic voters may only be willing to tolerate so much in a party swinging to the left. “They are somewhat conservative. They don’t like paying a lot of taxes.”

Alfred Schnabel is one of them. The 42-year-old business analyst has kept his GOP registration but feels unwanted in either party. He is turned off by Trump and wary of Democratic presidential hopefuls such as Sanders.

“There seems to be a push to go super-progressive,” he said of Democrats.

Still, Schnabel volunteered for a local Democratic legislative candidate last year because he was infuriated at his state representative’s criticism of gay people, and his frustration at the GOP outweighs his concerns about Democrats. He chalks up his ability to evolve politically to his education.