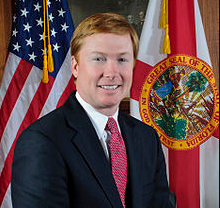 Republican Adam Putnam served as Florida’s Commissioner of Agriculture for the past six years. He also served as a member of the U.S. House of Representatives for 10 years. Last month, Putnam announced that he would be running for Florida Governor in the 2018 election. Upon learning this news and conducting some research, a few policies that Putnam voted for have come under scrutiny.

In December of 2005, Putnam voted to make the Patriot Act permanent. It is unfortunate that politicians like Putnam fail to realize the many flaws associated with the Patriot Act. When Bush originally signed the Patriot Act into law, he asserted that it would only permit the surveillance of communications made by terrorists, but in reality, it does much more. Is Putnam truly qualified to serve as governor when he has a track record of supporting policies that infringe on the privacy rights of average Americans?

One of the biggest problems with the Patriot Act is that it collects data from millions of Americans without their knowledge. This includes, but is not limited to, caller numbers, reciever numbers, the time/location of calls, and the like. By piecing together bits of metadata, the NSA is able to learn about potential relationships, possible heart conditions, and much more. This data is stored for five years.

Modern day politicians have become infamous for corruption and the employment of underhanded methods. Is it truly in the best interests of the American people for overly powerful politicians to have so much access to their lives? Moreover, should the people of Florida really elect someone who voted for an act that invades the privacy of millions without obtaining their consent? Putnam’s fitness to serve as Governor should be seriously evaluated in light of his support for the Patriot Act. Sacrificing liberty for the sake of security is never levelheaded or wise. Surrendering liberties allows for tyrants to step in and take control of vulnerable and afraid people.

Any person who seeks to hold public office should have the best interests of the American people at heart. This should come first and foremost, regardless of political party or affiliation. Putnam’s support for the Patriot Act clearly demonstrates his interest to place the affairs of government before the concerns of the people. Governors innately hold positions of power; people should only be voted into office when they have proven themselves to be worthy and deserving of such an honor.

Adam Putnam does an excellent job as painting himself as a strong Republican and a man of the people. Honestly, who can blame him? He wants to become the Governor of Florida and one must present a certain image in order to be likeable enough to earn votes. However, before casting votes, the people should always be sure to check track records, history, and policies that the candidate supports or opposes. The Patriot Act is horrific and violates the right to privacy for many Americans. In light of this news, the people of Florida should think long and hard before casting their votes for Adam Putnam.