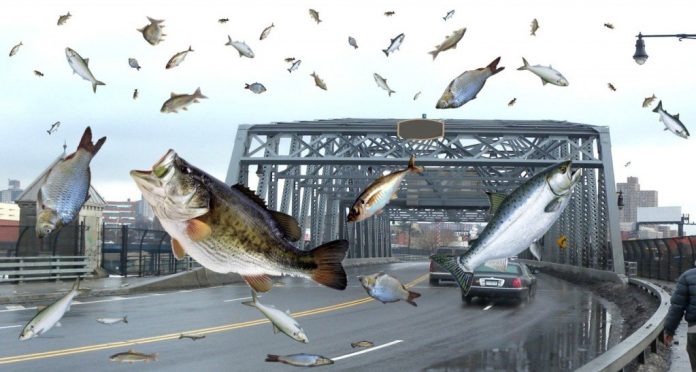 On December 29th  after heavy storms moved through Texarkana, Texas skies opened up. And it rained down fish all over town. And scientists claim this is another case of animal rain.

So don’t worry if it’s raining cats and dogs. It’s more likely to be raining fish and frogs.

The National Geographic Resource Library describes animal rain as a real weather phenomenon. It occurs when small animals get swept up in updrafts and waterspouts. And then they fall to Earth with raindrops. Animal rains of birds, bats, fish, snakes, and frogs have been reported for centuries.

Modern-day meteorologists claim that animal rain occurs when active storm clouds swirl above a large body of water. A tornado-like whirlwind or vortex forms. And it dips into the ocean, lake, or pond. The clouds shaped like waterspouts can travel over 100 miles per hour.  And they can pull small objects into them. Water, along with pebbles, fish, and other small aquatic animals can be funneled up into the cloud.

Strong winds or (called updrafts) may also pull animals into their swirling vortices. Updrafts can sweep up much larger animals than waterspouts—traveling birds and bats, as well as frogs, snakes, and insects.

Strong winds can also sweep them up. There have been reports all over the world of communities seeing things rain down like frogs, bats, worms, locusts, crabs, snakes, and fish, National Geographic reported.

In an interview with the local news station. James Audirsch told KTAL  he and a coworker looked outside and were shocked. They saw fish falling from the sky.

“There was a loud crack of thunder, and when we opened up the bay door, I looked outside and it was raining real hard,” Audirsch said. “A fish hit the ground, and then I said, ‘It’s raining fish! It really is!’ And fish were dropping here and everywhere.”

Fish were scattered across the parking lot. And some of them were 5 inches long.

“2021 is pulling out all the tricks … including raining fish in Texarkana today. And no, this isn’t a joke.” said the city of Texarkana’s Facebook.

“Animal rain is a phenomenon that occurs when small water animals like frogs, crabs, and small fish are swept up in waterspouts or drafts that occur on the surface of the earth. They are then rained down at the same time as the rain.

“While it’s uncommon, it happens, as evidenced in several places in Texarkana today. For the sake of everyone, let’s tiptoe into 2022 as quietly as possible. “