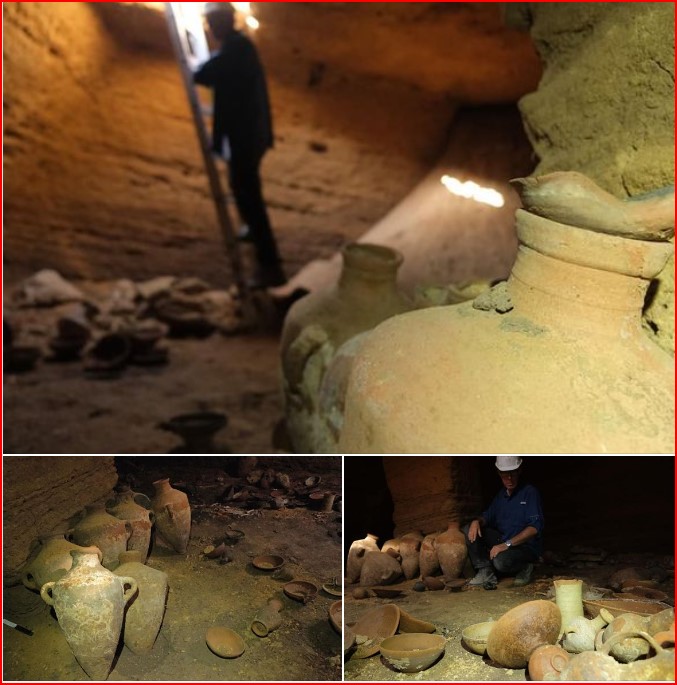 According to the Facebook page of the Israel Antiquities Authority (IAA), most of the pottery found there was intact. This includes storage jars and footed chalices. Some of the containers had been brought from as far as Lebanon and Cyprus.

According to the website, Palmachim National Park features “the remains of the ancient port city of Yavne-Yam from the Middle Canaanite period.” And previous excavations in the area uncovered “ancient waterworks and agricultural apparatus.”

The symbolism displayed in the cave included all gods of Lower and Upper Egypt. And dated back to the third pharaoh of the Nineteenth Dynasty of Egypt, King Rameses II.

Mostafa Waziri, head of the Israel Antiquities Authority, said it “looks like an Indiana Jones film set.” And the underground cavern also contained the burial chamber of Ptahemwia the royal scribe, and head of treasury for Ramses II.

The subterranean chamber was frozen-in-time about 3,300 years ago. In addition to the sarcophagus, some vessels were burial offerings to accompany the deceased. In those times, the Egyptians believed that items in the chamber would serve the dead in the afterlife.

The sarcophagus was decorated with the traditional inscriptions found on New Kingdom sarcophagi. It had the bearded head of the owner. And Nut, the sky-goddess Nut seated on the chest with her wings extended.

Rameses has been identified as “the Pharaoh associated with the Biblical Exodus from Egypt.” officials said.

Eli Yannai, a Bronze Age expert with the IAA, said that “This is a once-in-a-lifetime discovery.” And explained that “The fact that the cave was sealed … will allow us to employ the modern scientific methods available today, to retrieve much information from the artifacts … not visible to the naked eye.”

“The cave may furnish a complete picture of the Late Bronze Age funerary customs,” he added.

Although guards were posted at the site after the discovery, there appears to have been some looting before it was sealed up. Officials are investigating the theft.