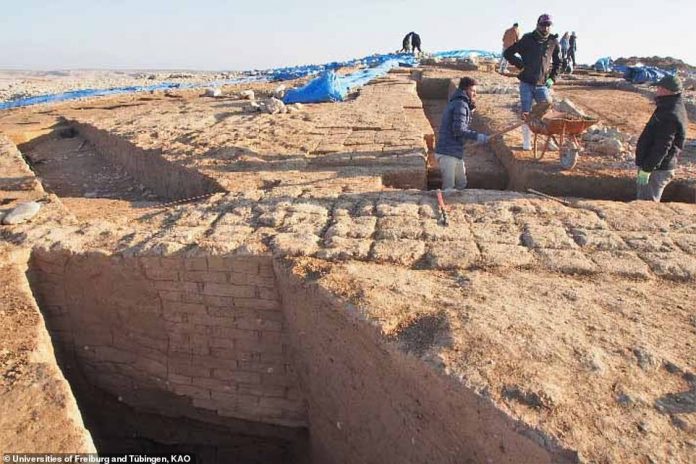 A Bronze Age city was completely submerged in the Tigris River since the Mosul Dam construction in the 1980s. Extreme drought conditions created low water levels which caused part of the settlement to briefly resurface in 2018. And in December 2021 ruins of a sprawling 3,400-year-old lost city emerged.

On Monday an archaeology team detailed their findings. The team included   German and Kurdish experts. And the scene of the dig is believed to be the ancient city known as Zakhiku. And it is known by the archaeology team as the Kemune dig site.

Ivana Puljiz, professor of Near Eastern archaeology at the University of Freiburg in Germany explained that the city dates back to the Mittani Empire, from 1550 to 1350 B.C. And archaeologists have known of its existence for a long time.

However, it was impossible to access while fully covered by the water.

It is believed the Bronze Age city was originally destroyed in an earthquake around 1350 B.C., according to the research team.

The earthquake disaster may have caused the upper parts of the walls to bury most of the buildings which preserved them. It also may have wiped out a large population since Zakhiku was believed to be a bustling city.

The research team raced to investigate. And map the ancient city located in the modern-day Kurdistan region. No one could be certain how long they would have before it disappeared again.

The excavation took place in all kinds of weather. The pressure was on to complete as much work as possible before the water completely covered the site again.

“We were under a lot of pressure since it was unclear how much time we would have and when the water would rise again,” Puljiz said. “We owe the great results to an extremely motivated and dedicated team that worked almost nonstop for several weeks in all kinds of weather including snow, rain, fog, hail and storms.”

“Since the city was located directly on the Tigris, it may have played an important role in connecting the core region of the Mittani Empire, which was located in present-day northeastern Syria, and the empire’s eastern periphery,” Puljiz said.

The team found partially standing towers, a palace and several other large buildings among the ruins of a fortified outpost.  The researchers also found fortified walls. The city was built with sun-dried mud bricks.

The dig also unearthed five ceramic vessels containing more than 100 tablets inscribed with cuneiform script. These artifacts appear to be an ancient correspondence method. And appear to date back to the Middle Assyrian period. Which means they were in use after the earthquake.

“It is close to a miracle that cuneiform tablets made of unfired clay survived so many decades under water,” Peter Pfälzner, director of the Department of Near Eastern Archaeology at the University of Tübingen in Germany said in a statement.

To help preserve the ancient city, the ruins have been covered with plastic coating. And truck loads of gravel have been added to the site. The gravel is an aid to protect the clay walls.

“It is completely unpredictable when it will resurface,” she said. “The only thing that is certain is that me and my colleagues will be there again when the time comes.”