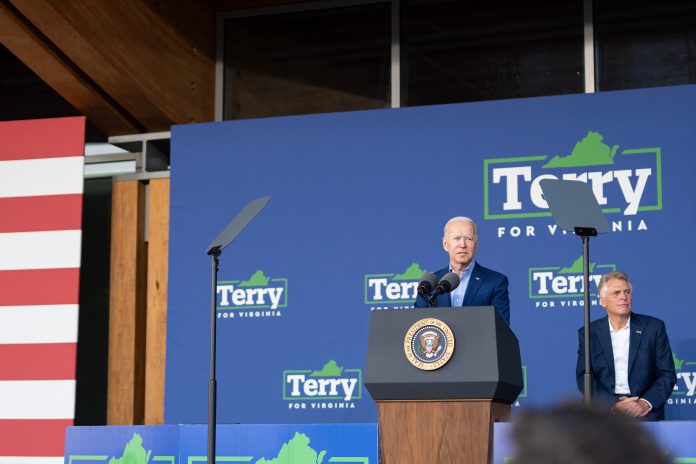 Virginia is down to the wire in a gubernatorial election that’s less than one week away. Republican Glenn Youngkin and Democrat Terry McAuliffe are each hard at work to become the next governor of Virginia.

Youngkin and McAuliffe, right now, are in dead heat, as polls show them each tied at 46%. For years, Democrats have managed to win elections in Virginia; however, this could change due to Biden’s lack of popularity in Virginia and McAuliffe’s claims that parents don’t deserve a say in what schools teach their kids.

Earlier this week, President Biden traveled to Virginia to campaign on McAuliffe’s behalf. During this time, the 46th president made one of the biggest flubs ever.

On Tuesday, the president declared America’s currently on the “right track” with him in office. Biden’s false assertion that he’s got the country on the right course comes amid low consumer confidence, crime increases, inflation, supply chain bottlenecks and more.

The president’s speech in Virginia ultimately involved him promising various freebies and bashing former President Trump. This, of course, is Biden’s view of how to best promote McAuliffe. The president didn’t seem to realize he’s not very popular in Virginia, despite winning the state in 2020.

On Thursday, former Vice President Pence will travel to Virginia. The purpose of Pence’s visit is to campaign for Youngkin; to do this, the vice president will deliver a speech regarding education.

Education is a pivotal factor in the ongoing Virginia gubernatorial race. Many parents are in agreement with Youngkin that they should, in fact, have a say about what schools are putting into their kids’ heads.

It’s furthermore reported that McAuliffe’s comments about parents supposedly shouldn’t have a say in what schools are having their kids learn hurt him with suburban voters. It’s also something that Youngkin is holding McAuliffe accountable for.

If Youngkin wins the Virginia gubernatorial election, it will be a major step for the Republican Party. Not only would a Youngkin win end the winning streak Democrats have enjoyed in Virginia for years; it would also indicate Americans are no longer taking what Democrats have to offer.