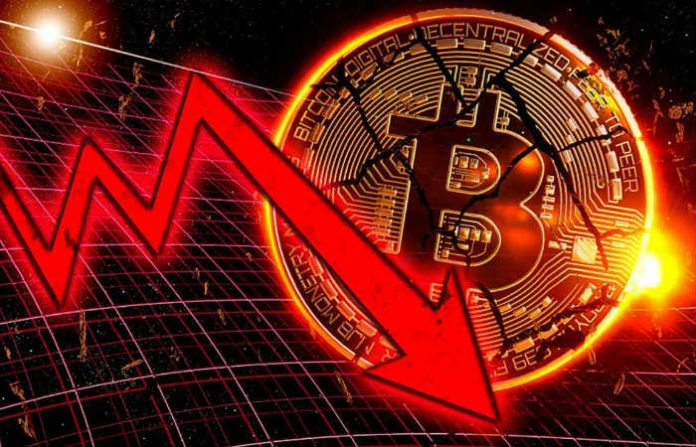 Bitcoin, the largest cryptocurrency in the world by market value plummeted sharply on Thursday. The digital currency and other cryptos fell sharply as hawkish minutes from the Federal Reserve’s December meeting hit global risk assets.

In the last 24 hours, Bitcoin was trading around the $42,700 mark, a 7% decrease from the previous day, according to data from Coin Metrics. As of this moment, the digital token is trading around the $43,000 mark; the lowest price in over a month. Meanwhile, Ethereum, the second-largest crypto by market cap plunged nearly 12% to $3,335 while Solana sank 12% to $146.

The price plummets followed a large sell-off after stocks fell on Wednesday. The move followed the release of minutes from The Fed’s December meeting. During the meeting, the central bank will lessen its supportive monetary policy, including reducing the number of bonds it holds. It also said that it may raise interest rates sooner than expected. In conjunction with that, the benchmark 10-year Treasury yield topped 1.7% on Wednesday.

Technology stocks among other growth assets tend to be hit when rates rise. This is because future earnings turn into a less attractive medium to investors when yields are higher.

“Overall, I think the global markets have shown weakness in light of the recent Fed moves to raise interest rates. Hence, I do think the drop yesterday is quite correlated. We’ve seen U.S. markets fall yesterday and as a result, all other risk asset classes fared equally poorly including crypto,” said Vijay Ayyar, vice president of corporate development and international at cryptocurrency exchange Luno.

“Specifically with regard to Bitcoin and crypto, the last 4 weeks have seen some weak price action owing to a lack of interest/demand, holiday season and potentially similar factors.”

Shares in Europe and Asia-Pacific also dropped on Thursday.

“The downward pressure on the price is expected to continue until the market fully priced in the tighter-than-expected future monetary policy,” Hasegawa said in an emailed note Thursday.