Home America Black Holes: Light at the end of a tunnel
SHARE 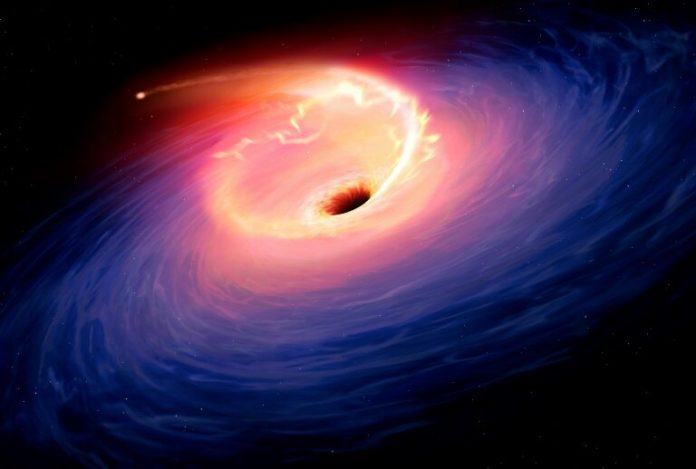 Stanford University astronomer Dan Wilkins and his group of researchers saw something no one has seen before.  Their telescope was looking at black holes. One of them was 800 million light-years from Earth. And they spotted X-ray light emissions coming out of the backside of the black hole.

“Any light that goes into that black hole doesn’t come out, so we shouldn’t be able to see anything that’s behind the black hole,” Wilkins explains. “The reason we can see that black hole is warping space, bending light, and twisting magnetic fields around itself.”

The telescopes were recording a strange pattern of bright flares of X-rays. And then, the unexpected happened. New smaller flashes of X-rays appeared. And they had different colors than the brighter flares.

Researchers confirm that the same X-ray flares were reflected from the back. This gave them the first-ever views of the far side of a black hole.

“I’ve been building theoretical predictions of how these echoes appear to us for a few years,” said Wilkins. “I’d already seen them in the theory I’ve been developing, so once I saw them in the telescope observations, I could figure out the connection.”

Studying coronas led to another discovery

Coronas are formed when a gaseous substance falls into a black hole. And once inside, it becomes super-heated. At millions of degrees in temperature electrons split from atoms creating a magnetic plasma. This is a phenomenon that mimics a space hurricane.

The magnetic field of X-ray light arcs high above the black hole. And similar to the Earth’s Sun it finally breaks. And a very bright uninterrupted source of light is created. At that time the corona appears to surround the black hole.

Since the corona light is X-ray light, scientists analyze it to map a black hole.

On Wednesday the exciting findings were published in the British journal Nature.

The observed phenomenon was predicted decades ago by Albert Einstein’s theory of general relativity. But it was never confirmed until the light from behind a black hole was finally seen.

“Fifty years ago, when astrophysicists starting speculating about how the magnetic field might behave close to a black hole, they had no idea that one day we might have the techniques to observe this directly and see Einstein’s general theory of relativity in action,” said Roger Blandford, a co-author of the paper. Blandford is an expert in physics and particle physics and a professor at Stanford and SLAC.

Other co-authors of the research study are from Saint Mary’s University (Canada), the Netherlands Institute for Space Research (SRON), the University of Amsterdam, and Pennsylvania State University.