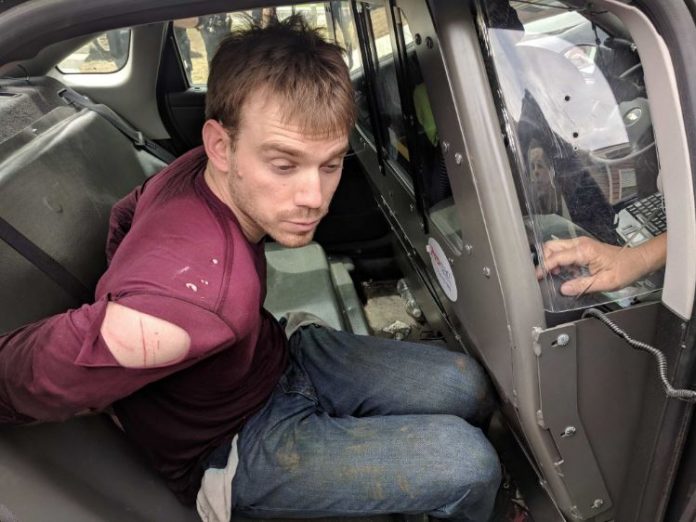 The Metro Nashville Police Department (MNPD) announced the arrest of Travis Reinking, the suspect in the killing four people at a Waffle House restaurant.

The MNPD tweeted that officers apprehended Reinking at around 1:00 PM local time in a wooded area near Old Hickory Blvd & Hobson Park on Monday.

The area in which Travis Reinking was apprehended was the subject of aerial and canine searches Sunday and ground searches earlier today. His movements since the shooting are unknown. Reinking refused to give a statement to detectives. pic.twitter.com/F36lxQz6mz

The police department also stated that prior to the arrest, a citizen found a handwritten ID card bearing the suspect’s name near 1-24 Old Hickory Blvd interchange.

This laptop bag, empty except for a handwritten ID card bearing the name Travis Reinking, was found by a citizen near the I-24 Old Hickory Blvd interchange. Unknown whether it was discarded before or after the shooting. Reinking is believed to have been in that area Sat. night. pic.twitter.com/yduQlXvAFE

Police officers conducted aerial, canine, and ground searches in the area since Sunday until today. Reinking refused to give a statement to detectives.

In a tweet, Acting Nashville Mayor David Briley expressed relief that Reinking is now in custody. He also thanked the law enforcement for their hardwork.

Thank you, @MNPDNashville, @FBI, @TBInvestigation, and all parties for your hard work. We are glad to know that our community will receive justice. The people of Antioch and all of Nashville can breathe a sigh of relief. https://t.co/b1Ri0NDUIG

This afternoon, MNPD and partners arrested murder suspect Travis Reinking. While we all are breathing a sigh of relief right now, the grieving for the loss of our neighbors will continue for a lifetime. Tomorrow evening, we will come together as a community.

We will be at the SE Community Center at 6:30PM and will have crisis and trauma counseling on site provided by the MNPD Behavioral Health Division. We will have condolence books where you can write to the families of those lost, as well as books to write to those still healing.

According to police, the number of fatalities should have been more if James Shaw Jr., a Waffle House customer did not confront Reinking, wrestle the rifle from his hand and toss it over the counter. After that, Reinking fled the restaurant and dropped his jacket containing two magazines for his rifle. Shaw’s action definitely saved many lives.

In July 2017, the United States Secret Service arrested Reinking for being in a restricted area near the White House. After the arrest, authorities in Tazewell County, Illinois and the FBI interviewed him. Authorities in Illinois revoked his firearms authorization and seized his four firearms including an AR-15 rifle. The police returned the firearms to Reinking’s father, who admitted giving them back to him.