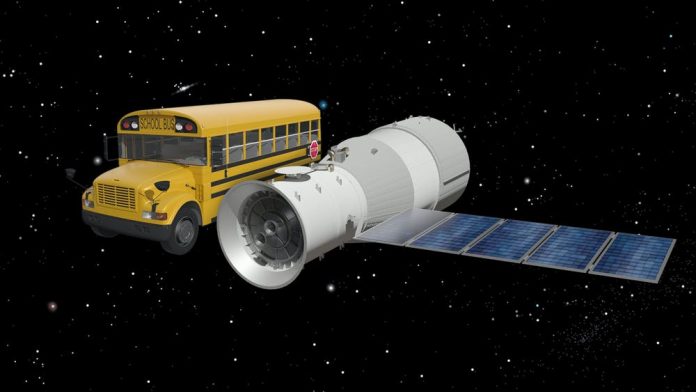 This weekend space experts expect an uncontrolled re-entry of  Chinese rocket debris from a launch in late April. It is uncertain where the debris will land. But it is making its way back to Earth. And it could hit any place between the North latitude lines of New York, Madrid, and Beijing. And South in a large area from Chile to New Zealand.

With the landmass-to-ocean ratio of our planet, experts hope whatever doesn’t burn up will fall into the ocean.

“Where and when the new Long March 5B stage will land is impossible to predict. The decay of its orbit will increase as atmospheric drag brings it down into more denser,” Andrew Jones of Space News reports.

“The most likely event will see any debris surviving the intense heat of reentry falling into the oceans or uninhabited areas, but the risk remains of damage to people or property.”

There was no damage done to people or property. And almost all the debris burned up in the Earth’s atmosphere, never making it to the surface.

But keep in mind the Chinese rocket debris is 23 tons or about seven times bigger than the SpaceX space junk.

Astrophysicist Jonathan McDowell claims “The Long March 5B core stage is seven times more massive than the Falcon 9 second stage that caused a lot of press attention a few weeks ago when it reentered above Seattle and dumped a couple of pressure tanks on Washington state.”

A controlled re-entry is the only way to assure that mission space debris doesn’t cause damage or rain down in a populated area.

Often larger, second-stage rockets even perform de-orbit burns to lower altitudes and reduce the in-orbit time. These steps are taken to lower the chance of in-space crashes with other spacecrafts. And to immediately allow re-entry into the atmosphere in a safe zone.

The mission may result in Chinese rocket debris

Long March 5B, one of China’s largest rockets launched a 22.5-metric-ton Tianhe module from Wenchang. And the Tianhe separation was 8 minutes in flight.

The rocket was made to launch space station modules into orbit. Its unique design uses a core stage and four side boosters to drop its payload directly into low Earth orbit.

After getting the module successfully into low Earth orbit the core stage was trapped. It was unable to re-enter the Earth’s atmosphere. And couldn’t land in a target re-entry zone.

Most expendable rocket first stages do not reach orbital velocity. And they reenter the atmosphere to land in a pre-defined reentry zone. Some larger, second-stages perform deorbit burns to a lower altitude. This reduces time in orbit and lowers the chance of collisions with other spacecraft.

Holger Krag, European Space Agency head of the Space Safety Programme, says it is estimated that an average of about 100 tons of space junk re-enters the Earth’s atmosphere on an annual basis. He claims  “This relates to about 50-60 individual events per year.”

“It is always difficult to assess the amount of surviving mass and number of fragments without knowing the design of the object, but a reasonable “rule-of-thumb” is about 20-40% of the original dry mass.”

The biggest incident, so far, was in 1979 when NASA’s 76-ton Skylab, had an uncontrolled reentry that scattered debris across the Indian Ocean and Western Australia.

McDowell says he hopes China will make changes in the future to avoid similar events. “I think by current standards it’s unacceptable to let it reenter uncontrolled,” McDowell reports. “Since 1990 nothing over 10 tons has been deliberately left in orbit to reenter uncontrolled.”

It’s not just about what’s coming down this weekend. China’s first space station launch in 2011, the Tiangong-1, or Heavenly Palace is still out there.  Its design has no re-entry plan for the school bus-size space station. It is unknown where and when that 10 tons will be heading our way.