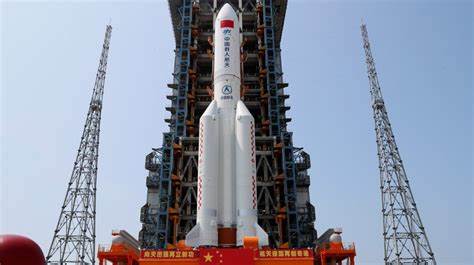 For the second time this year, the remnants of an out-of-control Chinese rocket re-entered the planet’s atmosphere over the Pacific Ocean. It was the fourth time since 2020 that a Chinese Long March 5B had made an uncontrolled re-entry.

The mission to carry the last piece of China’s Tiangong space station into low orbit space was a success. But China does not cooperate in noticing landings. And cannot control where the remnants of the launcher may come down.

This is China’s most powerful heavy-lift rocket design which was first launched in 2020. It is about the size of a 10-story building and weighs around 23 tons or 21 metric tons.  But unlike most rockets, it can’t reignite its engine on the descent. And there is no way to control where it lands.

Most orbital rockets are designed where the first stages can ditch into the ocean or over unpopulated areas.  And the U.S. company SpaceX designed its Falcon 9 rocket for controlled vertical landings and future reuse.

Chinese rocket plunges into the ocean

US Space Command confirmed pieces of the massive rocket plunged into the Pacific Ocean on re-entry. Fortunately, no one was harmed, and no damage was done.