Home U.S. News A Closer Look At The Dynamic Between Rand Paul and Donald Trump
SHARE 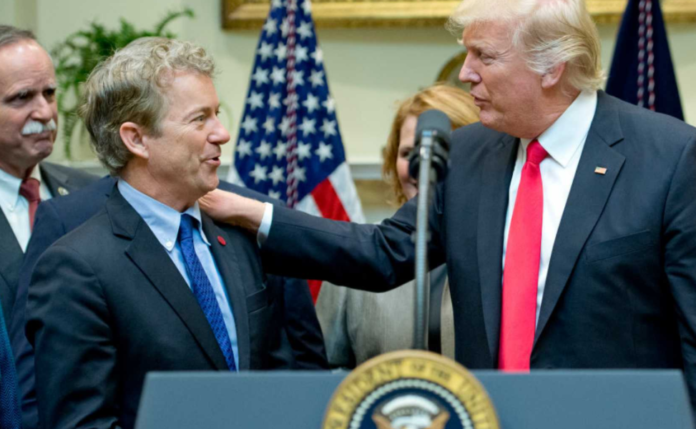 Throughout this week, many people have asked Kentucky Senator Rand Paul about his opinions and feelings towards President Donald Trump, who he ran against in the primaries of the 2016 election. According to The Daily Wire, Paul provided the following answer during a Fox News interview on Thursday:

“I always compare. Every day, I wake up, and I say, ‘It could have been Hillary Clinton.’ We could be at war in the Middle East because Hillary Clinton wanted to go to war everywhere, and she would be at war with American business. It could be terrible, and I think Trump’s doing a much better job than we would have gotten.”

Paul also expressed his support for the President and his willingness to defend the latter from groundless attacks perpetrated by the liberal mainstream media. Quite frankly, the dynamic between Kentucky Senator Rand Paul and President Donald Trump is one that should be respected and emulated. Although the two men were political opponents and harsh words were exchanged during the 2016 Presidential election, in the end, they came together for the greater good and discarded antagonism and animosity.

While Senator Paul and President Trump are no longer adversaries or enemies, there are still some remaining issues where they hold different opinions. One of those issues is healthcare and the manner in which Obamacare should be repealed and replaced. Senator Paul gave the following statement on healthcare, as reported by Politico:

“I’m also fearful, both politically and also from the point of view of policy, that if we keep parts of Obamacare in place, that the Republican plan will fail. And I’m really wanting Republicans to be saved from themselves. If they take over health care and pass something that resembles Obamacare and doesn’t work, then we will own a terrible and tragic health care system, and I don’t think Republicans ought to own this thing.”

While Senator Paul and President Trump have different ideas of how to enact appropriate healthcare reform, both men seem willing to compromise, to a certain extent, as a means to engender success and progress that will benefit the nation as a whole. Too many American politicians are unwilling to join forces and work productively with those who may disagree with them.

Not all parties will see eye to eye, but the dynamic between Rand Paul and Donald Trump should serve as a model to other politicians who may disagree with each other on policy issues. At the end of the day, we are all Americans and we must work together in order to secure the prosperity of this nation. United we stand, but divided we fall.