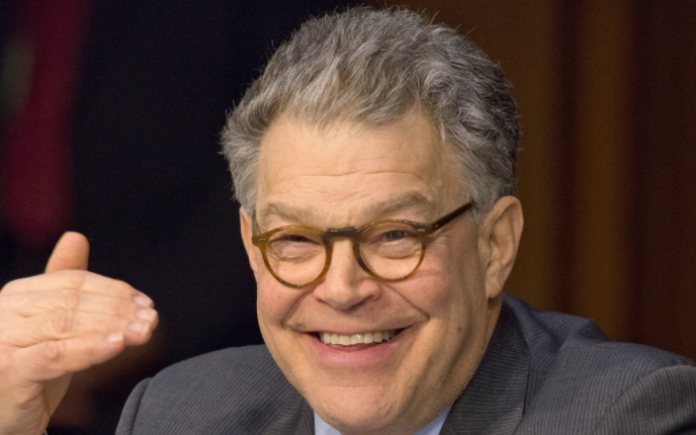 Despite the photographic evidence of Al Franken’s sexual misconduct coupled with his own admissions, some members of Congress are now urging the Senator to undo his resignation, reports The Hill.

“What they did to Al was atrocious, the Democrats. The most hypocritical thing I’ve ever seen done to a human being — and then have enough guts to sit on the floor, watch him give his speech and go over and hug him? That’s hypocrisy at the highest level I’ve ever seen in my life. Made me sick.”

Manchin declined to mention whether or not the photographic evidence of Franken groping a sleeping woman’s breast offended him as much as the Democrats who called for Franken’s resignation.

Franken announced his design to resign from Congress following additional allegations of sexual assault. One woman alleged that Franken kissed her without her consent. Two other women also affirmed that the Democratic Senator groped and fondled them while photographs were taken in his office.

Even when Franken announced his forthcoming departure from Congress, he still claimed he did nothing wrong, despite the photos of him groping the breasts of a sleeping LeeAnn Tweeden:

“I know in my heart that nothing I have done as a senator, nothing, has brought dishonor on this institution, and I am confident that the Ethics Committee would agree.”

How Does America Feel Regarding Calls for Franken to Reverse His Resignation?

Calls for Franken to reverse his resignation have engendered very strong criticism. Democrats have especially faced backlash. Many people noted the contradiction between claiming to advocate for women’s rights and supporting a man who has violated women’s rights.

Furthermore, other Americans have hypothesized that Democrats do not really care about sexual assault. Conspiracy theories about Democrats pretending to care while the Alabama Senate seat was up for grabs have also surfaced. Overall, the people of this nation have slammed newfound support of Franken as hypocritical and selective outrage regarding sexual assault.

Thus far, Franken has yet to announce whether or not he will reverse his resignation. Many Americans are saying that he should not, in light of evidence and accusations against him. Top Democratic officials also have yet to issue a public statement pertaining to this matter.