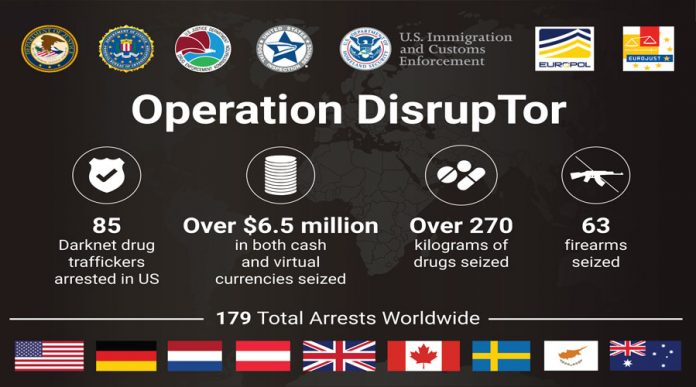 The U.S. Department of Justice (DOJ) announced the arrests of 179 darknet drug traffickers and the seizure of illegal drugs, weapons, as well as cash, and virtual currencies.

The takedown of darknet narcotics traffickers was the result of Operation DisrupTor, a coordinated effort by the Joint Criminal Opioid and Darknet Enforcement (JCODE) team and Europol.

According to them, Operation DisrupTor resulted in the seizure of more than $6.5 million in cash and virtual currencies and approximately 500 kilograms of drugs worldwide.

In the United States, the operation resulted in the seizure of 274 kilograms of drugs, including fentanyl, oxycodone, hydrocodone, methamphetamine, heroin, cocaine, ecstasy, MDMA, and medicine containing addictive substances, and 63 weapons.

Operation DisrupTor led to the arrests of 121 darknet drug dealers in the United States, 42 in Germany, eight in the Netherlands, four in the United Kingdom, three in Austria, two in Canada, and one in Sweden.

There is “no safe haven” for darknet drug dealers

Deputy Attorney General Jeffrey Rosen said, “Criminals selling fentanyl on the Darknet should pay attention to Operation DisrupTor. The arrest of 179 of them in seven countries—with the seizure of their drug supplies and their money as well—shows that there will be no safe haven for drug dealing in cyberspace.”

FBI Director Wray said, “With the spike in opioid-related overdose deaths during the COVID-19 pandemic, we recognize that today’s announcement is important and timely. The FBI wants to assure the American public, and the world, that we are committed to identifying darknet drug dealers and bringing them to justice.”

“The 21st century has ushered in a tidal wave of technological advances that have changed the way we live. But as technology has evolved, so too have the tactics of drug traffickers.  Riding the wave of technological advances, criminals attempt to further hide their activities within the dark web through virtual private networks and tails, presenting new challenges to law enforcement in the enduring battle against illegal drugs. Operation DisrupTor demonstrates the ability of DEA and our partners to outpace these digital criminals in this ever-changing domain…”

Operation DisrupTor follows the success of last year’s Operation SaboTor and the coordinated law enforcement takedown of the Wall Street Market, one of the largest illegal online markets on the dark web.