Home Investigates DOJ Strikes Back At Media, Election Investigations Not Over
SHARE 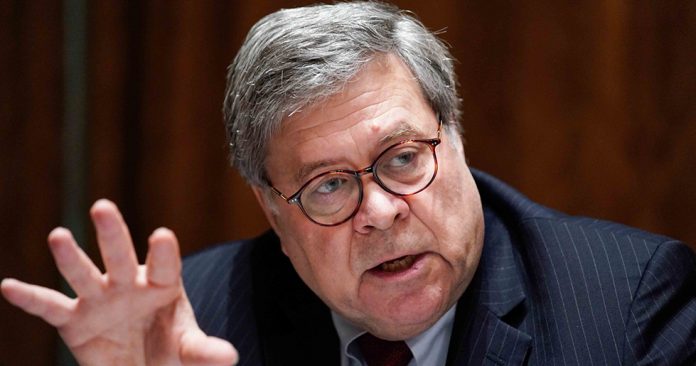 U.S. Attorney General William Barr and the Department of Justice (DOJ) just shredded the news media and what they said is its incomplete reporting on what the top law enforcement official said about election investigations.

On Tuesday, it was reported by the major media outlets that Barr said, “to date, we have not seen fraud on a scale that could have affected a different outcome in the election.”

“There’s been one assertion that would be systemic fraud and that would be the claim that machines were programmed essentially to skew the election results,” the attorney general said. “And the DHS and DOJ have looked into that, and so far, we haven’t seen anything to substantiate that.”

But that is only part of the story, The DOJ said late on Tuesday. The keywords in his statement are “to date.”

what the Attorney General stated. The Department will continue to receive and vigorously pursue all specific and credible allegations of fraud as expeditiously as possible.” @ClareHymes22 @CBSNews

“Some media outlets have incorrectly reported that the Department has concluded its investigation of election fraud and announced an affirmative finding of no fraud in the election,” a spokesman for the DOJ said “That is not what the Associated Press reported nor what the Attorney General stated. The Department will continue to receive and vigorously pursue all specific and credible allegations of fraud as expeditiously as possible.”

The Associated Press reported that many people are focused on the criminal justice system when it comes to finding remedies to the election issues but that, often, the remedies are found in civil court.

“Most claims of fraud are very particularized to a particular set of circumstances or actors or conduct. … And those have been run down; they are being run down,” the attorney general said. “Some have been broad and potentially cover a few thousand votes. They have been followed up on.”

When given the initial quote by the media the attorneys for President Donald Trump’s campaign hit back.

“With the greatest respect to the Attorney General, his opinion appears to be without any knowledge or investigation of the substantial irregularities and evidence of systemic fraud,” former New York City Mayor Rudy Giuliani and attorney Jenna Ellis said.

“With all due respect to the Attorney General, there hasn’t been any semblance of a Department of Justice investigation,” they said.

After the election in November, Barr authorized federal prosecutors to follow any “substantial allegations” of voting issues “if there are clear and apparently-credible allegations of irregularities that, if true, could potentially impact the outcome of a federal election in an individual State.”

Barr told the prosecutors that “while serious allegations should be handled with great care, specious, speculative, fanciful or far-fetched claims should not be a basis for initiating federal inquiries.”