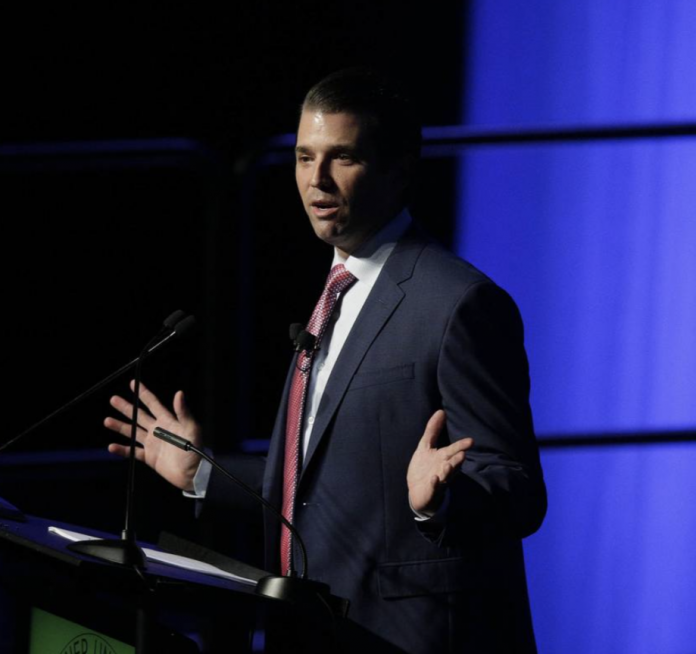 2020 Democrat Kamala Harris has had a difficult campaign. Throughout her status as a presidential candidate, Harris has routinely trailed behind fellow contenders Joe Biden, Elizabeth Warren, Bernie Sanders and others. Recently, Harris asked an auidence if they felt “ready” for her presidency, only for them to tell her “NO!”

Over the course of the 2020 race, Harris has also regularly chuckled at various times which others deem as inappropriate. This is something which Donald Trump Jr., the president’s eldest son, pointed out via Twitter. Don Jr.’s observation subsequently led to a back-and-forth between himself and Harris.

What You Need to Know about Don Jr. vs. Kamala Harris

Don Jr. first questioned why Harris has a tendency to chuckle at her own jokes “always way [too] long and way too hard.” In the first son’s tweet, he also posted a video of Harris which shows her having a good laugh and asking someone whether or not they read her book. Finally, Don Jr. branded Harris as the “most disingenuous person in politics” following Hillary Clinton.

Why is @KamalaHarris the only person that laughs at her jokes… always way to long and way too hard? The most disingenuous person in politics… after Hillary. pic.twitter.com/elskW29XeP

Harris had some own choice words in response to this and subsequently tweeted back at Trump’s eldest son. In her tweet, Harris implied that the president himself is a joke, whilst also getting in a dig at Don Jr.

You wouldn’t know a joke if one raised you. https://t.co/zUV3MLkmVm

Don Jr. then responded with an image of Harris’ standing in the polls. The data from Real Clear Politics shows Harris trailing behind Joe Biden, Elizabeth Warren, Bernie Sanders, and Pete Buttigieg. Don Jr. used this information to support the claim that Harris’ “tanking poll numbers” ultimately mean that her presidential campaign is a joke.

Based on your tanking poll numbers, what’s definitely a joke is your entire campaign 🤣 Yikes! https://t.co/3vkxo5gUyO pic.twitter.com/oKMCKuscBR

Since the tweet seen above, Harris has not responded to the president’s eldest son.

Harris surged in the polls following the first primary debate; at the time of this debate, Harris called out Biden for his past work with segregationist senators. The boost which Harris experienced ultimately didn’t last because she took a hit when fellow contender Tulsi Gabbard called her out during the second primary debate.

Gabbard took issue with Harris’ past work as a prosecutor and the individuals whom Harris helped lock up. Since the second primary debate, Harris has consistently trailed behind other candidates in the polls.