Home And More Everything You Need To Know About the Trial and Sentencing of Michelle...
SHARE 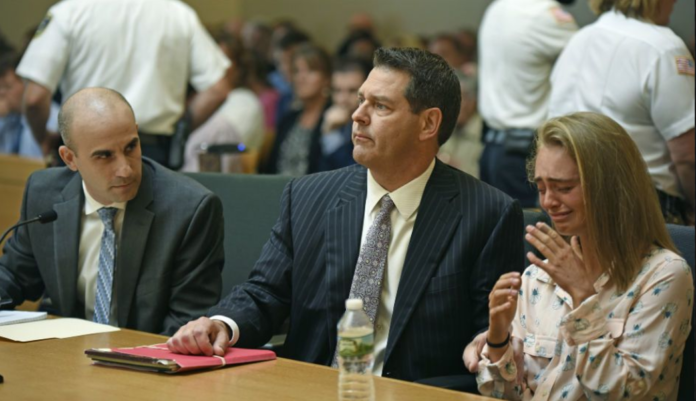 Mere hours ago, America witnessed the sentencing of Michelle Carter, a Massachusetts woman who maliciously goaded her mentally ill boyfriend, Conrad Roy III into taking his own life. Reports from CNN state that Michelle Carter was convicted of involuntary manslaughter by Judge Lawrence Moniz and sentenced to 2.5 years with 15 months in prison and heavy probationary order upon her release. Many people were appalled at the light nature of her sentence, but should bear in mind that Carter’s actions will have social and financial ramifications for the rest of her life.

Prior to Michelle Carter’s sentencing, the father and sister of Conrad Roy III stood before the court and read remarks detailing the significance Conrad had in their lives and how devastated they were by his suicide. Later, the prosecutor read statements from Conrad’s mother in which she asked for Carter to receive a minimum sentence of at least 7 years.

As Conrad Roy III’s family spoke about the impact he had in their lives, Michelle stoically sat beside her defense attorney, Joe Cataldo. Only when her sentencing began did she start to cry and express sorrow. As the prosecution stated, Michelle Carter showed absolutely no remorse for her heinous deeds. After Conrad’s death, she feigned grief on social media, posting Facebook messages about how she could have saved him. The truth of the matter is that Carter knew exactly what she was doing and she simply did not care. Conrad’s life meant absolutely nothing to her, despite her phony declarations of love for him after the fact.

After the prosecution made their remarks, prior to Carter’s sentencing, her defense attorney, Cataldo spoke as well. He noted Carter’s past struggles with bulimia, anorexia, and depression. Quite frankly, Carter’s prior battles with mental illness should have been all the more reason for her to help Conrad live, not manipulate him into committing suicide.

The case of Michelle Carter has engendered some Americans to inquire as to whether or not her text messages are protected under the 1st Amendment which allows freedom of speech. Carter’s lawyer, Cataldo touched on this point multiple times as well, citing her behavior as “just speech.” What people must understand is the reality that freedom of speech does not absolve one from the consequences of their speech.

Some people have argued that Conrad could have simply chosen not to get in the truck and disregarded Carter’s words. What they fail to take into account is Conrad’s struggle with depression, which has been diagnosed as a mental health disorder. Conrad was not functioning at the same mental capacity as your average adult. He deliberated many times before ending his life and Carter, taking advantage of his fragile mental state, goaded him, even going so far as to tell him to get back in a truck filled with carbon monoxide so that he could die.

The actions of Michelle Carter will follow her for the rest of her time on earth, despite her lenient legal sentence. Cataldo mentioned that Carter had previous ambitions to work in real estate, ambitions which are highly unlikely to come to fruition. Most people will not want to work with the infamous woman who berated her vulnerable boyfriend into commiting suicide.

The direct text messages which led to Conrad Roy III’s death can be viewed here.