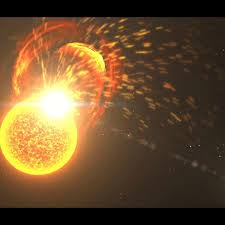 A “fire-breathing star,” known as EK Draconis is firing off a massive solar storm.

Astronomers reported this new phenomenon in a star system just 100 light-years away. An international team of researchers led by the University of Colorado-Boulder published a study on December 9th in Nature Astronomy. In it, they describe a star that shoots fire. And they warn a similar event could hit Earth.

The Colorado study has been tracking the sun-like star that shoots out solar flares, known as coronal mass ejections (CME). The CMEs are composed of fiery particles and plasma that are moving incredibly fast through space.

EK Draconis, Latin for the dragon, is located in Northern skies in the constellation Draco. Known as a coronal mass ejection (CME), stars regularly shoot out clouds of extremely hot particles (plasma) that hurtle through space at astonishing speeds.

If this was happening in our solar system it could burn up orbiting satellites and crash large cities’ power grids. The Earth could suffer terrible blackouts and lose communications networks.

“Coronal mass ejections can have a serious impact on Earth and human society,” says co-author Dr. Yuta Notsu in a draft of the research.

And the research team says it could happen here. Since they estimate that our Sun releases CME’s towards the Earth every 100 years or so. Experts expect a powerful solar storm in this solar system around 2200, at the end of the century.

EK Draconis is described as a “curious star” in the study. It is approximately the same size as our Sun. But it is much younger, probably about 100-million-years-old.

“It’s what our sun looked like 4.5 billion years ago,” Dr. Notsu reports. And he says we need to continue to study “space weather” so we understand the dangers.

The study authors observed EK Draconis for 32 nights in winter and spring last year. They also did scanning with both NASA’s TESS (Transiting Exoplanet Survey Satellite) and Japan’s SEIMEI telescopes.

They got lucky on April 5, 2020, when the star erupted into a massive superflare. This was followed, 30 minutes later, by the release of a CME which flew out from the star’s surface.

The space scientists were only able to see phase one of the event. They call it the “filament eruption” phase. They were able to confirm that the massive solar flare was moving at up to one million miles-per-hour.

But the experts were concerned about the speed and power behind the CMEs.  They were more powerful than any ever seen before.

Study leader Kosuke Namekata, a Ph.D. student at the National Astronomical Observatory of Japan, believes that the Earth may someday experience a solar storm just as strong as the one from EK Draconis.

“This kind of big mass ejection could, theoretically, also occur on our Sun,” Notsu adds. “This observation may help us to better understand how similar events may have affected Earth and even Mars over billions of years.”