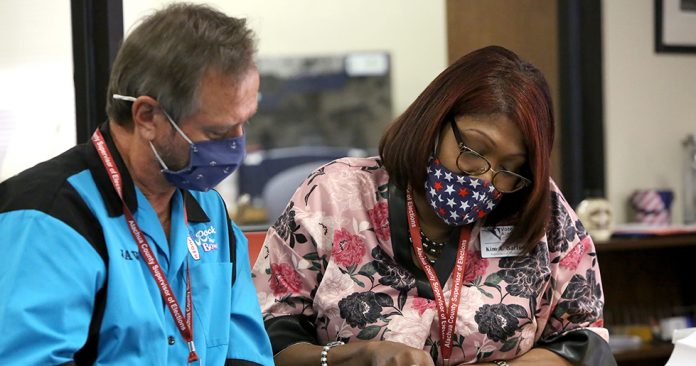 Some vote counters in the state of Georgia have reported their concerns with oddly pristine ballots that came in batches overwhelmingly marked for former Vice President Joe Biden.

The recount workers, some of whom are Democrats, reported the batches of oddly perfectly marked ballots that went 98 percent for Biden, which caused one self described Democrat recounter to say that they believed their was fraud.

Recount workers who went on the record in Wood v. Raffensperger described ballots that stood out to them, perfectly done ballots that went 98% for Joe Biden. And their testimonies were shared by Epoch Times reporter Ivan Pentchoukov on Twitter.

Georgia recount worker with 20 years of experience handling ballots described an odd batch that stood out. Pristine sheets with no markings and 98% for Biden.

The first worker said that the ballots they handled looked worn and used except for the pristine batch of ballots that favored Biden.

“Most of the ballots had already been handled; they had been written on by people, and the edges were worn. They showed obvious use. However, one batch stood out. It was pristine. There was a difference in the texture of the paper – it was as if they were intended for absentee use but had not been used for that purposes. There was a difference in the feel,” the recount worker said on the record.

“These difference ballots included a slight depressed pre-fold so they could be easily folded and unfolded for use in the scanning machines. There was no markings on the ballots to show where they had come from, or where they had been processed. These stood out,” the workers reported.

“In my 20 years’ of experience of handling ballots, I observed that the markings for the candidates on these ballots were unusually uniform, perhaps even with a ballot-marking device. By my estimate in observing these ballots, approximately 98% constituted votes for Joseph Biden. I only observed 2 ballots as votes for President Donald J. Trump,” they said.

3rd monitor, a Democrat: "Hundreds of these ballots seemed impeccable, with no folds or creases. The bubble selections were perfectly made … only observed selections in black ink, and all
happened to be selections for Biden."

But that is not all. Another worker, who described themselves as a Democrat, said the batch of ballots for Biden were suspiciously perfect.

“Hundreds of these ballots seemed impeccable, with no folds or creases. The bubble selections were perfectly made … only observed selections in black ink, and all happened to be selections for Biden,” the worker observed.

“Based on my observations, I believe there was fraud was committed in the presidential election and question the validity of the Georgia recount process,” they said.

4th witness, also a Democrat saw perfect black marks on a stack of ballots … 500 in a row all for Biden.

Same witness went to a different Georgia county the next day and observed the same anomaly during the recount.

"All of these ballots had the same two characteristics: they were all for Biden and had the same perfect black bubble." pic.twitter.com/C1gYqs0QyT

“I watched then pull out a pile of what I observed to be absentee ballots and noticed two very distinct characteristics that these ballots had. One, I noticed that they all had a perfect black bubble and were all Biden select. I was able to observe the perfect bubble for a few minutes before they made me move away from the table…I heard them go through the stack and call out Biden’s name over 500 times in a row,” the worker said. Then, they said, they witnessed the same thing the next day at another vote counting center.

“All of these ballots had the same two characteristics: they were all for Biden and had the same perfect black bubble, they said.

They were followed by a series of other witnesses, all shared by Pentchoukov, that had major concerns about these anomalies.

Scott Hall is 5th witness alleging the same anomaly: hundreds of mail ballots without creases and perfectly marked bubbles that appear to not have been mailed. (Mail ballots are folded in order to be placed in an envelope.)https://t.co/qNndiapwyh pic.twitter.com/S0rcUi5KGu

Robin Hall is the 6th witness who saw perfectly marked mail-in ballots, with some batches 100% for Biden, which appear to have been printed rather than filled out by someone at home.

Hall shared a spreadsheet of the box numbers in questions.https://t.co/kGuizf7Dn8 pic.twitter.com/ismQOfEN4b

Barbara Hartman is the 7th witness who personally counted the uncreased mail ballots which appeared to never have been folded and all perfectly marked (as though with a stamp.)https://t.co/maNUl8Mqnv

The tweet about the second witness in this thread appears to be invisible to the world, so here's a screenshot: pic.twitter.com/2uCzjItwSz