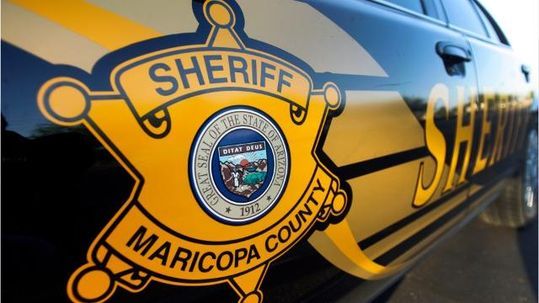 UCLA Law Professor Eugene Volokh released this article on The Washington Post yesterday that alleges that Attorney Aaron Kelly filed another fraudulent legal case naming a fake defendant.  This time the case was filed in his own backyard, Maricopa County, Arizona, and it is alleged that Kelly hoodwinked local judge Colleen French.

The USA Herald has previously covered the Maricopa County, Arizona Law Office of Kelly/Warner allegations of filing fake lawsuits with fake defendants and fake notarizations all throughout the country in an effort to trick Google into removing consumer complaints about multiple shady characters (see end of article).

In this article we are going to break down what also appears to be fraud on the court, this time filed by Attorney Aaron Kelly in Maricopa County, Arizona, and seemingly designed to trick Judge Colleen French into granting the motion where the defendant is non-existent:

In this case, filed by Attorney Kelly and granted by Judge French, the Plaintiff is Gil D. Cohen.

As a background, Gil D. Cohen received a litany of complaints online from employees and customers.  One of the complaints was listed here on RipOffReport and is clearly written by a former employee of Gil Cohen.  In the online complaint by the former employee, Cohen is accused of the several serious improprieties, including misuse of client funds and withholding employee payouts.

Cohen acknowledges in his own words that this RipOffReport listing was filed by a former employee via his response to the posting: 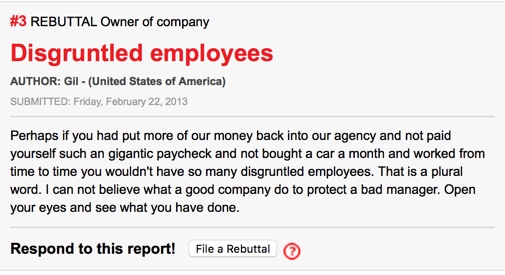 The significance of Gil Cohen’s response is that he clearly had identified that a former employee had written this complaint, therefore it is completely inexcusable what Attorney Kelly did next.

Attorney Kelly filed a lawsuit against a “Robert Smith” in India claiming that Smith was the author of the RipOffReport about Cohen.   Robert Smith from India?! 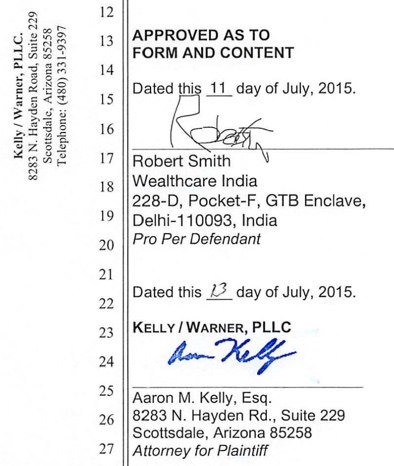 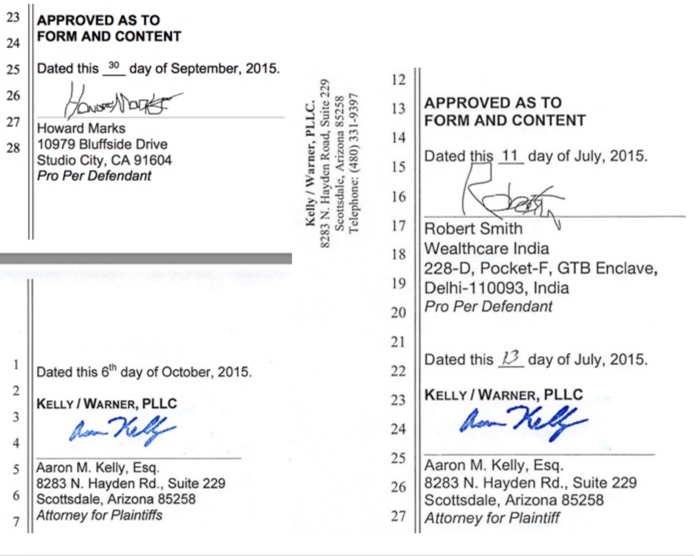 After speaking with a source that is a certified document/handwriting examiner, it was this experts opinion that the signatures are from the same person and that the person likely signed the document with their non-dominant hand.  Basically that means that if Attorney Kelly was right handed, it is entirely possible that these documents were forged using his left hand.

There’s another import link to make here.   It appears as-if this case was referred to Aaron Kelly by his client, friend, and business associate Richart Ruddie.

Per Eugene Volokh’s article in the Washington Post, it looks like accused court fraudster Richart Ruddie worked in conjunction with Attorney Kelly in the Cohen case as he did with 2 other attorneys:

“The new development: Late last week, Levy filed an amicus brief in Smith v. Levin — the Baltimore case — urging that the order be vacated; and Monday, the court did vacate it. But Levy’s amicus brief, among other things, also points to two other cases in Baltimore filed by Bennett Wills that seem to fit the same fake-defendant pattern (see also Levy’s affidavit and exhibits):

Bennett Wills has filed two additional “fake lawsuits” in Maryland circuit courts that are comparable to this case. Visionstar, Inc. v. Perez, No. 24C15005743 (Cir. Ct. Balt. City); Cohen v. Wilkerson, No. 06C15070022 (Cir. Ct. Carroll Cy). (Copies of these two complaints are attached). The papers use very similar language, and an investigation conducted by a private detective retained by UCLA law professor Eugene Volokh to assist in his investigation of the phenomenon of fake litigation established that, as in this case, neither of the two individuals who were named as defendants and whose signatures appear on the consent orders live at the addresses shown for them. See attached Declaration of Giles Miller.

Moreover, both cases show obvious signs of being fake: the signatures of defendants “Mark Wilkerson” and “Daniel Perez” appear to have been written by the same hand; and the very carefully handwritten signature of “Mark Wilkerson” spells his name as “Wilerkson.” And in the Visionstar case, the allegation in paragraph 13 about the IP address from which the supposedly defamatory reviews were posted to the Ripoff Report web site is a highly implausible. Generally speaking, a subpoena can be issued in connection with a case seeking to identify the poster of an anonymous comment, but that is something that happens after the complaint is filed, not something that can be listed in the complaint.

Undersigned counsel has contacted inside counsel for Xcentric Ventures, the company that operates Ripoff Report, and ascertained that his client has never received any subpoena to identify the anonymous author of the reports cited in the Visionstar complaint; that attorney also represented that he checked the IP addresses for the reports cited in the complaint, and that none of them was associated with the address 12.4.33.71 as the complaint alleges.

Moreover, when I called the plaintiff in Cohen v. Wilkersonto ask about the case, he stated that he didn’t authorize its filing, and didn’t know who the ostensible defendant (Wilkerson) was. He said he had hired Richart Ruddie to do something about some posts that he (Cohen) thought were libelous, but he had not expected or authorized this lawsuit. And I think that is plausible, though I of course can’t know for sure. (I tried to reach the plaintiff in Visionstar, but haven’t heard back.)