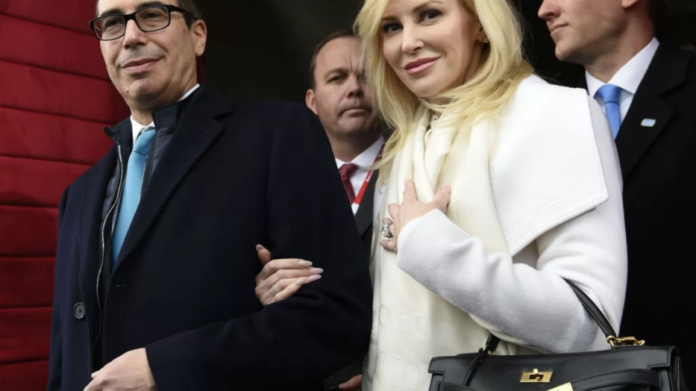 Louise Linton, wife of Treasury Secretary Steve Mnuchin, is under attack by the media for defending herself on Instagram.

According to CNN, the controversy began when Louise Linton posted a picture on Instagram. The image featured herself and her husband departing from a government airplane in Kentucky. Additionally, Linton wore white and tagged various designers in her image.

Apparently, this photo was offensive to Jenni Miller, an Oregon mother, who posted the following comment:

“Glad we could pay for your little getaway. #deplorable”

Louise Linton responded to this snide, uncalled for attack with the following response:

“@jennimiller29 cute! Aw!!! Did you think this was a personal trip?! Adorable! Do you think the US govt paid for our honeymoon or personal travel?! Lololol. Have you given more to the economy than me and my husband? Either as an individual earner in taxes OR in self sacrifice to your country? I’m pretty sure we paid more taxes toward our day ‘trip’ than you did. Pretty sure the amount we sacrifice per year is a lot more than you’d be willing to sacrifice if the choice was yours.”

Linton ended her remarks by asking Miller to relax.

Since Louise Linton’s response to Jenni Miller, the media has attacked the former in droves, claiming that she criticizes Miller for not being rich. Quite frankly, the media is wrong, as usual. There is nothing wrong with Louise Linton posting an Instagram image of herself traveling with her husband. There is nothing wrong with Louise Linton and her family having money. Rich people do not deserve to be attacked out of envy by their less successful counterparts.

Further statements from Jenni Miller are as follows:

“She went to a state where one in five people lives in poverty and many children don’t know where their next meal is coming from. Instead of helping in some way, she chose to brag about her outlandishly expensive clothes. It’s more than tone-deaf, it’s deplorable.”

Jenni Miller is a huge representation of the problem in America. Nobody is owed anything. Rich people like Louise Linton are under no obligation to “help in some way,” as Miller arrogantly assumed. Wealthy people are under no obligation to foot the bill for their less fortunate counterparts. If Louise Linton wants to post an image of herself in lovely designer clothes, that is her right. She does not deserve to be berated for it. Jenni Miller’s attack on Louise Linton was rooted in nothing but envy, which is sad.

Hopefully, Jenni Miller learned her lesson. She had absolutely no right to attack Louise Linton for posting an innocent photo on Instagram. Linton’s response was merited and the criticism against her is unjustified. Furthermore, nothing changes. At the end of the day, Louise Linton will still have her money and designer clothes when the media outrage blows over. Likewise, Jenni Miller will be in the same spot she was in before leaving the passive aggressive Instagram comment.

The moral of the story is as follows: If you want to be on top, work for it. Do not attack those who are more successful than you simply because of where they are in life. They might respond and you might not like what they have to say.