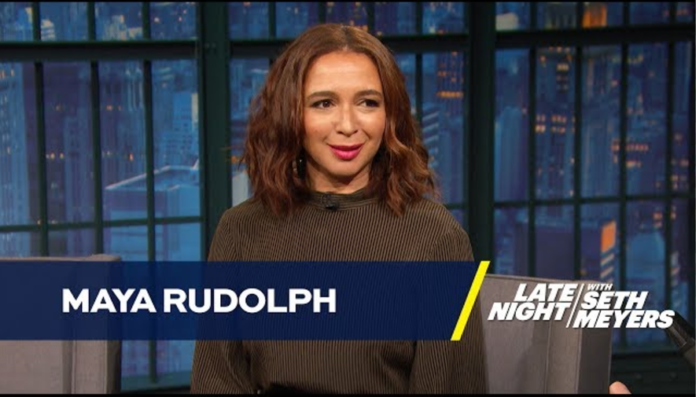 Apparently, D-list ‘celebrity’ Maya Rudolph believes she can imitate First Daughter, Ivanka Trump, according to The Hill. Yesterday, during an interview on “Late Night with Seth Meyers,” Rudolph made the following remarks:

“It was when [Trump] said she doesn’t get involved in politics,” the “Saturday Night Live. Because that makes sense. I noticed she was like, through her teeth, like she kind of talks like she has a sexy secret. She’s like always talking like she works in a lingerie store a little bit. Like, if you want to get the matching panties, you can get them, but they’re ‘14.95.’ Also, don’t quote stuff that’s real, because that just makes you look really stupid.”

What ever happened to “When they go low, we go high?” Ever since Michelle Obama coined that phrase during the 2016 Presidential election, Democrats have declared it to be their mantra, but is it really? Liberals have repeatedly mocked conservatives and Trump supporters. The same people who claim to be so loving and tolerant are the ones who jeer at accents and speech patterns.

Rudolph’s decision to imitate the eldest First Daughter is quite interesting. She imitated Ivanka Trump’s speaking habits, but will Rudolph attempt to imitate the plethora of accomplishments the First Daughter has made? Will she start a successful business, work in the White House, or have a networth in the millions as Ivanka Trump does? Of course Rudolph will not, because sneering at the manner in which someone speaks is so much easier than achieving greatness.

Vanity Fair reports that Rudolph has imitated First Lady Melania Trump as well in past times. Of course, Rudolph will receive praise and accolades from the Democrats and radical liberals who despise the First Family, but the imitation speaks to something much deeper within American politics.

In the mainstream media, liberal women are often hailed as this protected class who should be exempt from any and all criticism, yet conservative women are habitually ridiculed and somehow it is ok. Where are the feminists who preach about the importance of equality, fairness, and women’s rights? Somehow, those sentiments only seem to apply to women who identify as Democrats.

The reality is this: the world knows who Melania and Ivanka Trump are. Significantly less people are aware of Maya Rudolph. Despite the unfair treatment that conservative women are frequently subjected to by the liberal media, the old saying holds true:

“Imitation is the best form of flattery.”