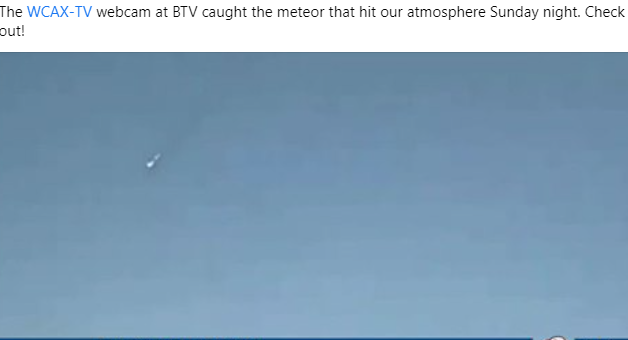 A fireball streaked across the evening sky over New England on Sunday, March 7th. Residents of Vermont, Massachusetts, and parts of New York state saw a meteor enter the atmosphere. At 5:38 p.m. ET, the cosmic rock was traveling at an estimated  42,000 miles per hour.

NASA’s Meteor Watch confirmed that people witnessed and some even heard the meteor enter the Earth’s atmosphere. Meteor Watch described the moment it exploded. The statement was that it “fragmented violently, producing a pressure wave that rattled buildings and generated the sound heard by those near the trajectory.”

The meteor first became visible 52 miles above Green Mountain State’s Mount Mansfield State Forest. It moved Northeasterly through the upper atmosphere until it hit the atmosphere and exploded 33 miles above Beach Hill.

This meteor can be described as a fireball since it exhibited a  magnitude of brightness greater than -4, according to the American Meteor Society.  If an asteroid or meteoroid does not burn up before impact, as this one did it is called a meteorite.

“As the object … penetrated deeper into the atmosphere, pressure built up its front while a partial vacuum formed behind it. About 30 miles up, the pressure difference between front and back exceeded its structural strength,” said the statement.

The fireball was captured on a webcam at Burlington International Airport. And seen by over 100 people who reported it on social media.

For anyone who was wondering about the big boom / meteor earlier today in #btv #vermont , I dug through some webcam footage and found this on the WCAX / BTV Airport webcam- watch the upper left. pic.twitter.com/oyVLSoVahP

Even more, people commented on NASA’s post on Facebook and user Shannon Lemley-Willis wrote she had heard the “boom” in Johnson, Vermont.

“Kids playing outside described it as ‘big trucks crashing,'” she wrote.

“I didn’t get a video, but I definitely saw it in Watertown, MA. It was dusk, so the sky was fading to a deeper blue, and I saw a bright red, orange, and yellow streak to the north of me,” Dan Nystedt wrote. “I thought it must have been something much bigger than a standard ‘shooting star’ to be so visible when not totally dark yet.”