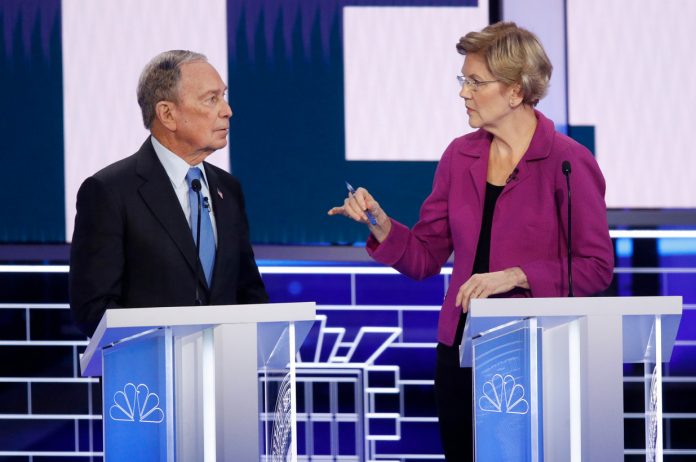 The biggest loser of the night is Mike Bloomberg.

Democratic presidential hopefuls had their sights set on billionaire Mike Bloomberg right out of the gate at Wednesday night’s debate in Nevada.

“I’d like to talk about who we’re running against — a billionaire who calls women fat broads and horse-faced lesbians, and no I’m not talking about Donald Trump, I’m talking about mayor Bloomberg,” she said.

“Democrats are not going to win if we have a nominee who has a history of hiding his tax returns, harassing women and racist policies,” she added.

Meanwhile, Vermont Sen. Bernie Sanders called out Bloomberg for stop-and-frisk, saying the practice went after minorities and “that is not how you’re going to increase voter turnout.”

Then, Minnesota Sen. Amy Klobuchar piled on, criticizing Bloomberg for suggesting other candidates should drop out.

Bloomberg fired back at Sanders, saying there is no way he thinks the Democratic Socialist can win.

“If he goes and is the candidate we will have Donald Trump for another four years,” he said.

“I’m a New Yorker I know how to take on an arrogant conman like Donald Trump.”

To make matters worse, Bloomberg was questioned on NDAs he had in place with women and Bloomberg admitted to multiple getting signed over the years.  After tonights debate, Mike Bloomberg’s hope for president is pretty much over.