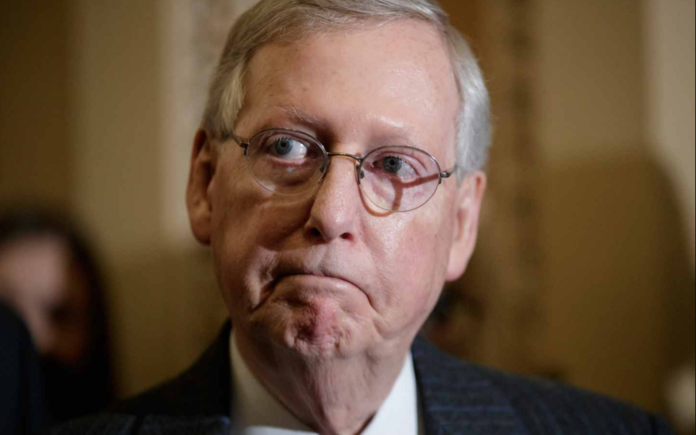 The houses of U.S. Senate Majority Leader Mitch McConnell and House Speaker Nancy Pelosi were vandalized as acts of protest on the eve of the opening of a new session of Congress and the swearing-in of lawmakers.

Fake blood and a pig’s head were left outside the home of Pelosi in California while graffiti was put up on the house of McConnell in Kentucky.

A photo published by the New York Post on Twitter showed the words “Cancel rent! We want everything!” on Pelosi’s house.

The troublemakers also scrawled on McConnell’s home door with the words “Weres [sic] my money” and on the Republican lawmaker’s window, “Mitch kills the poor.”

McConnell has earlier stuck down calls to increase the U.S. coronavirus stimulus relief checks to help businesses and individuals in the country hard-hit by the global pandemic.

He even defied President Trump’s call to increase pandemic relief checks for most U.S. residents from $600 (€494) to $2,000. McConnell described the incident as a “radical tantrum.”

Some GOP senators noted that payments of this nature are not directly targeted to individuals suffering economically, but instead would go to all folks earning an income below $75,000.

In a statement on Saturday, McConnell said, “I’ve spent my career fighting for the first amendment [which protects free speech] and defending peaceful protest. I appreciate every Kentuckian who has engaged in the democratic process whether they agree with me or not.”

He added, “This is different. Vandalism and the politics of fear have no place in our society. My wife and I have never been intimidated by this toxic playbook. We just hope our neighbors in Louisville aren’t too inconvenienced by this radical tantrum.”

Beshear said, “While the First Amendment protects our freedom of speech, vandalism is reprehensible and never acceptable for any reason.”

The vandalism to @senatemajldr McConnell’s home is unacceptable. While the First Amendment protects our freedom of speech, vandalism is reprehensible and never acceptable for any reason. ^AB

The financial relief deal earned overwhelming support from both Democrats and Republicans. The White House has earlier confirmed that outgoing President Donald Trump would sign off on the bill.