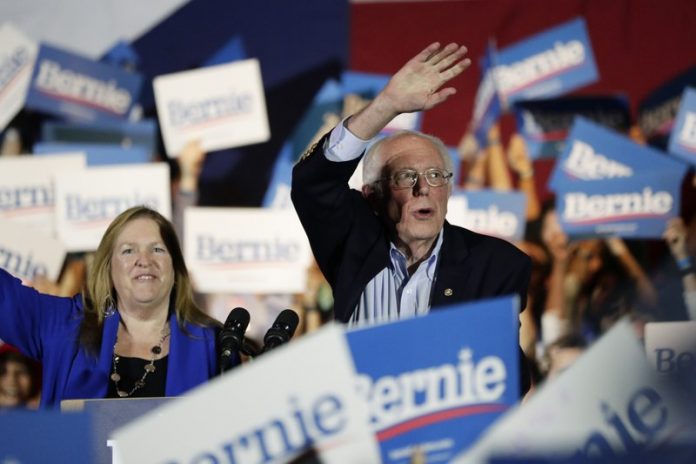 Bernie Sanders’ commanding Nevada caucus victory made him a top target for his Democratic rivals and a growing source of anxiety for establishment Democrats worried that the nomination of a self-avowed democratic socialist could cost the party the White House.

Sanders’ win solidified his front-runner status in the crowded field as the race turns to Saturday’s presidential primary in South Carolina, where his moderate opponents will scramble to try to blunt the Vermont senator’s momentum. Just three days later after that contest, 14 states vote on Super Tuesday, March 3, when one-third of the delegates are awarded. A strong showing in those states could put Sanders on a glide path to the nomination against Republican President Donald Trump.

That prospect has amplified concerns for Democrats who believe Sanders’ liberal policies will drive away moderate and independent voters in the general election in November. South Carolina Rep. Jim Clyburn, the top-ranking black leader in Congress, warned of added risk for Democrats if Sanders was the nominee.

“I think it would be a real burden for us in these states or congressional districts that we have to do well in,” Clyburn told “This Week” on ABC.

He noted that congressional districts that helped Democrats win back the House are moderate and conservative. “In those districts, it’s going to be tough to hold on to these jobs if you have to make the case for accepting a self-proclaimed democratic socialist,” Clyburn said.

Sanders’ campaign argue the candidate will bring in new voters — largely progressives, young people and voters of color — who have been alienated by politics.

He successfully relied on that coalition Saturday to dominate his Democratic rivals in Nevada, pulling far ahead of second-place finisher former Vice President Joe Biden and Pete Buttigieg, the former mayor of South Bend, Indiana, who came in third. Massachusetts Sen. Elizabeth Warren landed in fourth, while Minnesota Sen. Amy Klobuchar and Tom Steyer were still in a close race for fifth on Sunday.

“We are bringing our people together,” Sanders said Saturday night. “In Nevada we have just brought together a multigenerational, multiracial coalition which is not only going to win in Nevada, it’s going to sweep this country.”

Sanders’ new status was clear as both Buttigieg and Biden went after him harder than they have before.

In his speech to supporters in Las Vegas, Buttigieg denounced Sanders in his sharpest terms yet, changing that the senator was calling for an “inflexible, ideological revolution that leaves out most Democrats.”

“Not to mention most Americans,” Buttigieg said.

He said Sanders has shown a “willingness to ignore or dismiss, or even attack the very Democrats that we absolutely must send to Capitol Hill.”

Biden, whose struggling campaign got only a slight boost in Nevada, took an indirect swipe both billionaire candidate Mike Bloomberg and Sanders, who is an independent and not a member of the party he’s seeking to represent in November.

“I ain’t a socialist. I’m not a plutocrat. I’m a Democrat,” Biden told supporters.

But some Democrats are worried that the new focus on Sanders may be too little, too late. Democratic strategist James Carville bemoaned the fact that until recently, most of Sanders’ opponents have largely failed to attack Sanders or draw scrutiny to his record.

“We gotta hope that some of these candidates develop political skills quickly,” he said.

If Sanders is the nominee, Carville said, “the risk in losing the election is deep and profound.” He added: “We just gotta pray.”

Indeed, Trump gloated on social media, continuing his weekslong push to sow discord between Sanders and his Democratic rivals.

“Looks like Crazy Bernie is doing well in the Great State of Nevada. Biden & the rest look weak,” Trump tweeted. “Congratulations Bernie, & don’t let them take it away from you!”

All the Democratic candidates are pledging to stay in the race through South Carolina, and some candidates were already campaigning Sunday in Super Tuesday states.

Nevada’s caucuses were the first chance for White House hopefuls to demonstrate appeal to a diverse group of voters in a state far more representative of the country as a whole than Iowa and New Hampshire. Sanders won by rallying his fiercely loyal base and tapping into support from the state’s large Latino community.

In a show of confidence, Sanders left Nevada on Saturday for Texas, which offers one of the biggest delegate troves in just 10 days on Super Tuesday.

Saturday’s win built on his victory earlier this month in the New Hampshire primary. He essentially tied for first place in the Iowa caucuses with Buttigieg, who has sought to position himself as an ideological counter to Sanders’ unabashedly progressive politics.

But for all the energy and attention devoted to the first three states, they award only a tiny fraction of the delegates needed to capture the nomination. After South Carolina, the contest becomes national in scope, putting a premium on candidates who have the resources to compete in states as large as California and Texas.

That when Bloomberg, the former New York mayor who dominated the political conversation this week after a poor debate-stage debut, intends to become a factor after skipping the first four contests.

The stakes were high for Nevada Democrats to avoid a repeat of the chaos in the still-unresolved Iowa caucuses, and it appeared Saturday’s contest was largely successful.

Nevada Democrats sought to minimize problems by creating multiple redundancies in their reporting system, relying on results called in by phone, a paper worksheet filled out by caucus organizers, a photo of that worksheet sent in by text message and electronic results captured with a Google form.

Buttigieg’s campaign is raising questions about the results, citing more than 200 reports of problems allocating votes. It wants the state party to disclose more details of the votes and address concerns before releasing final results. But the party said it was not planning to offer a more detailed voting breakdown and appeared to be inviting the campaign to follow recount rules if it wanted to challenge the results.