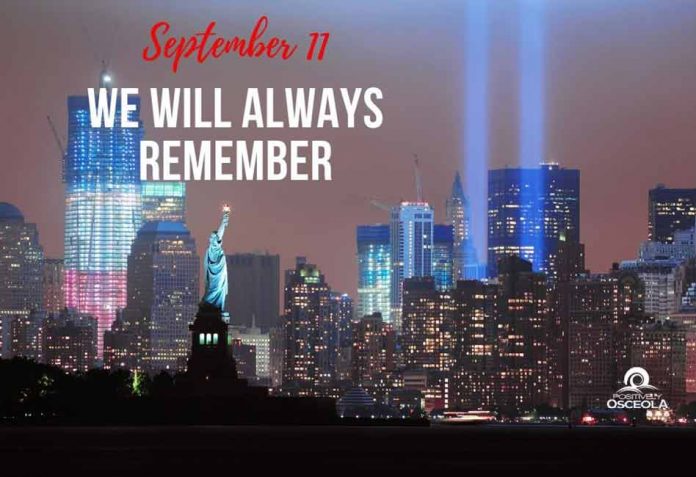 Throughout America and across the world memorial ceremonies were held to honor the events of September 11, 2001.

Twenty years ago two hijacked airliners made New York’s  World Trade Center towers fall. In Arlington County, Virginia another commandeered plane took a suicide plunge into the Pentagon. And over Pennsylvania passengers and crew of Flight 93 fought with their hijackers in an unsuccessful attempt to regain control of the airplane. Which ended up crashing into a Shanksville field.

Nearly 3,000 people were killed that day. It was the worst terrorist attack ever on US soil.

The event truly changed the world forever. Before September 11, 2001, America had not been as hard-hit by the growing terrorist attacks experienced by England, Italy, Spain, and our other allies. Suddenly terrorists were attacking us here. And 9/11 was just the beginning.

It was the start of two costly wars in Afghanistan and Iraq. Foreign policy was adjusted. The attacks marked the start of the war on terrorism. Rules were rewritten. And in America, nothing would ever be the same again.

Today the  9/11 Memorial began with a moment of silence, then a ringing bell. This is a 20-year tradition. We honor the victims and the heroes of tragic events.

President Joe Biden, and former Presidents Obama and Clinton, were gathered with a crowd of relatives of the victims. Memorial Square in New York remains Ground Zero.

This is the place where the Twin Towers of the World Trade Center were struck by the first hijacked planes. This is where the towers fell.

Events also took place in two other locations where the conspirators crashed the hijacked jets. And memorials were held at the Pentagon and in the fields near Shanksville, Pennsylvania.

Actually, events were held across the country. And September 11, 2001, is acknowledged around the world.

“It reminds me that as we honor those from many nations, faiths, and backgrounds who lost their lives, we also pay tribute to the resilience and determination of the communities who joined together to rebuild,” England’s Queen Elizabeth II.

“One of the things that became clear in 9/11. And has been clear since then is that the United States is the hometown of heroes who always run for danger to do the right thing,” President Obama said.

In 2019, President Donald Trump said that the “Sept. 11th attack remains seared into our soul.’

If ignored, trauma neither heals itself nor disappears. Sept. 11 was a national trauma that impacted every American on both a shared and personal level. For those who were not yet born 20 years ago, its impact might be more subtle but nonetheless is felt. Such is the power of history.  -Paul Murdoch

“We learned that courage was more common than we imagined and manifested itself in sudden splendor in the face of death,” President Bush said Saturday at the Pennsylvania ceremony of the 20th anniversary of the attack.