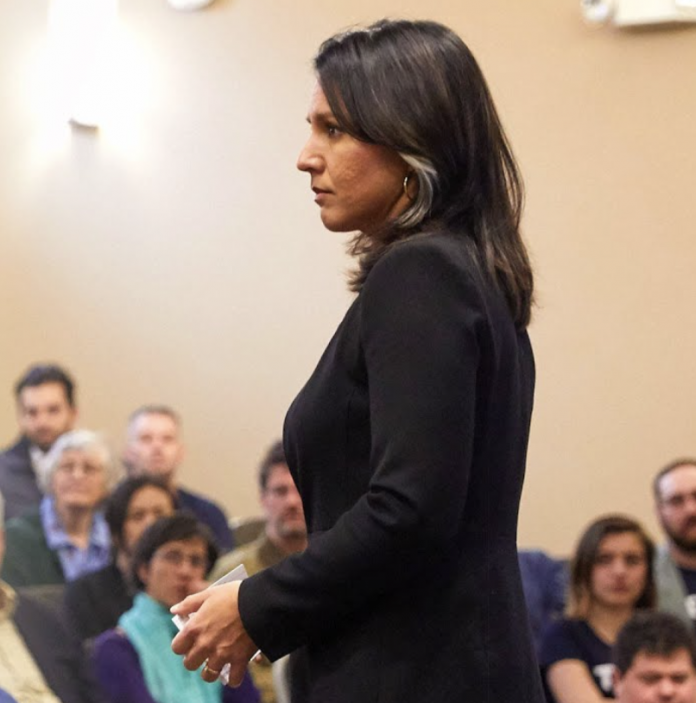 The Democrat Party has lost any and all basis to ever complain about sexism and the unfair treatment of female presidential contenders.

Time and time again, America has heard the left assert that women seeking office are not treated as fairly as their male counterparts; yet, the left themselves contributes to the same toxic culture which they claim to oppose.

Look no further than 2020 Democrat (and war veteran) Tulsi Gabbard.

A Review of the Left’s Mistreatment of Gabbard

Since the inception of Gabbard’s candidacy, the left has taken concerted efforts to ignore and blackball the Hawaii congresswoman.

One example occurred earlier this year; CNN purposefully excluded Gabbard from attending one of their presidential town halls. This exclusion came in spite of the network’s decision to invite candidates who were polling lower than Gabbard. The Hawaii congresswoman noted her attempts to reach out to CNN for their reasoning; thus far, the network has yet to answer.

Another instance of the left’s intentional ignorance of Gabbard occurred earlier this month. Following Elizabeth Warren’s exit from the race, former 2020 Democrat Kamala Harris stated that there are “no women currently in this race.” This is simply not accurate. Tulsi Gabbard is a woman and remains in the race.

Quite frankly, Democrats ought to be ashamed of themselves for how they’ve treated Gabbard; however, one of the worst instances has not yet been addressed.

The DNC bears significant responsibility for the poor treatment of Tulsi Gabbard; the same applies to Democrats who complain about unfair treatment of female politicians, yet remain silent about Gabbard’s treatment from the left.

After Gabbard won a delegate from American Samoa (thus qualifying her to appear on the next Democrat debate stage), the DNC announced their decision to raise the bar. Since Gabbard reached the previous mandate of candidates needing to have at least one pledged delegate, the establishment moved the goalpost, now mandating debate attendees to have at least 20% of pledged delegates.

We have two more debates– of course the threshold will go up. By the time we have the March debate, almost 2,000 delegates will be allocated. The threshold will reflect where we are in the race, as it always has.

Moving the goalpost at the last second is nothing more than a clear attempt to keep Tulsi Gabbard from debating. It’s as plain as day for anyone to see; if the DNC truly wanted to increase the threshold, they wouldn’t have waited until Gabbard reached their previous requirement before moving the goalpost. Yet, the same people who claim to oppose sexism and unfair treatment of female candidates remain silent.

In the wake of the DNC’s clear attempt to keep Gabbard off the debate stage, the war veteran has reached out to Joe Biden and Bernie Sanders for support.

.@JoeBiden @BernieSanders I’m sure you would agree that our Democratic nominee should be a person who will stand up for what is right. So I ask that you have the courage to do that now in the face of the DNC's effort to keep me from participating in the debates. #LetTulsiDebate

Thus far, both Biden and Sanders remain silent. This comes in spite of Sanders previously stating that “fair is fair” in 2016 and calling for all three candidates at that time to appear on the debate stage.

What's fair is fair. All three of the Democratic candidates for president should be on the debate stage. Period.

The DNC’s consistent ignorance and disregard of Tulsi Gabbard’s candidacy has removed whatever moral high ground Democrats thought they had. Never again should they pretend to care about women running for office. If Democrats truly cared about women seeking the presidency, they’d be outraged at how their own establishment treats Tulsi Gabbard.