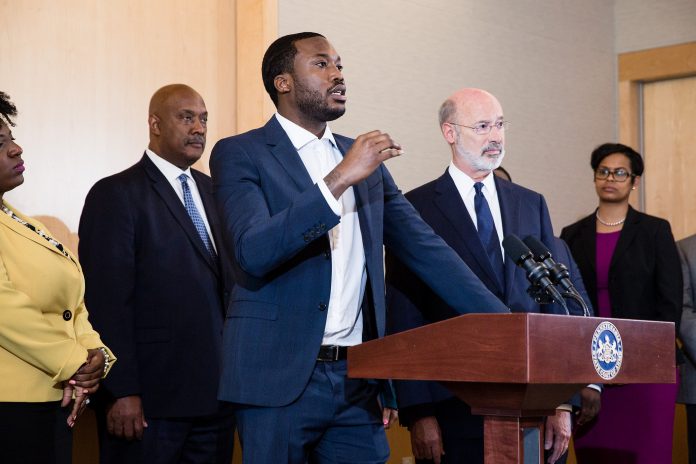 Several state lawmakers including Representatives Dwight Evans and Donna Bullock as well as Senator Larry Farnese joined the call to action at the National Constitution Center.

On Thursday, Gov. Wolf said the debate on how to fix Pennsylvania’s criminal justice system complicated. Over time, discussions changed and reflected the modern realities and problems in the current system.

The governor believe that they can improve the state’s criminal justice system to protect victims. They can also “end a cycle of incarceration that has left so many people feeling trapped, helpless, and without an opportunity to return to society” after their release from prison.

In addition, Gov. Wolf said Mill’s case put a spotlight on the state’s criminal justice system that it needs changes. He emphasized that the system must be “better and fairer for everyone” and “more focused on rehabilitation.”

Meek Mill is committed to speaking for the voiceless

On the other hand, Mill said he grew up in a neighborhood where young black men were constantly in contact with police. He knows that flaws of the criminal justice system.

In November last year,  Mill was sentenced to a minimum of two years in prison for violating a parole related to a 2008 gun and drug conviction. He was released on bail ten days ago after serving five months at a Pennsylvania State Correctional Institution in Montgomery County.

Mill said, “I actually know the errors of the criminal justice system personally because I’ve been tangled in the system since 18 years old.” He spent time with men and women and watched their families torn apart because of drug addiction, mental illness and technical violations.

He added, I actually made a commitment to speaking for the voiceless.” Furthermore, he said,“I’m greatly encouraged by the Governor’s commitment to ensuring a fair sentencing process and ultimately ending the unjust cycle of incarceration in our state.”

Meanwhile, Rubin said fixing the state’s criminal justice system is personal for him. According to him, the system “cost my friend Meek Mill six months of his life.” Reforms are also “extremely important” to ensure that people shouldn’t go back to prison for technical probation violations.

“I commend Governor Wolf for listening to the public outcry around criminal justice reform and actively taking steps to shine a light on the issue,” added Rubin.

Gov. Wolf is pushing for a number of initiatives to improve Pennsylvania’s criminal justice system including the following: