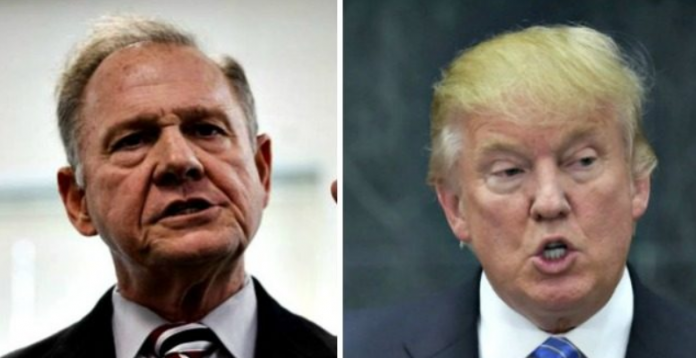 Democrats refusal to give even one vote for massive Tax Cuts is why we need Republican Roy Moore to win in Alabama. We need his vote on stopping crime, illegal immigration, Border Wall, Military, Pro Life, V.A., Judges 2nd Amendment and more. No to Jones, a Pelosi/Schumer Puppet!

Putting Pelosi/Schumer Liberal Puppet Jones into office in Alabama would hurt our great Republican Agenda of low on taxes, tough on crime, strong on military and borders…& so much more. Look at your 401-k’s since Election. Highest Stock Market EVER! Jobs are roaring back!

Roy Moore is currently facing allegation of inappropriate sexual behavior with a 14-year-old girl and a 16-year-old girl. However, the Alabama Senate candidate denies all accusations against him. Many of Moore’s supporters also believe the accusations are being employed as a tool to tank his campaign.

A few weeks ago, President Trump gave the following statement regarding allegations against Moore:

“He totally denies it. He says it didn’t happen. Forty years is a long time. He’s run eight races. This [never came] up.”

What Do Americans Think of President Trump’s Roy Moore Endorsement?

Republican Roy Moore was falsely accused, as was Republican Donald Trump.
Handy rule of thumb:
Virtually all ACTUAL predators & harassers are Dems.
Then they project their own crimes onto their enemies, as Goebbels taught.

"The President had a positive call with Judge Roy Moore during which they discussed the state of the Alabama Senate race and the President endorsed Judge Moore's campaign." – Principal Deputy Press Secretary Raj Shah

Roy Moore has since thanked President Trump for his endorsement.