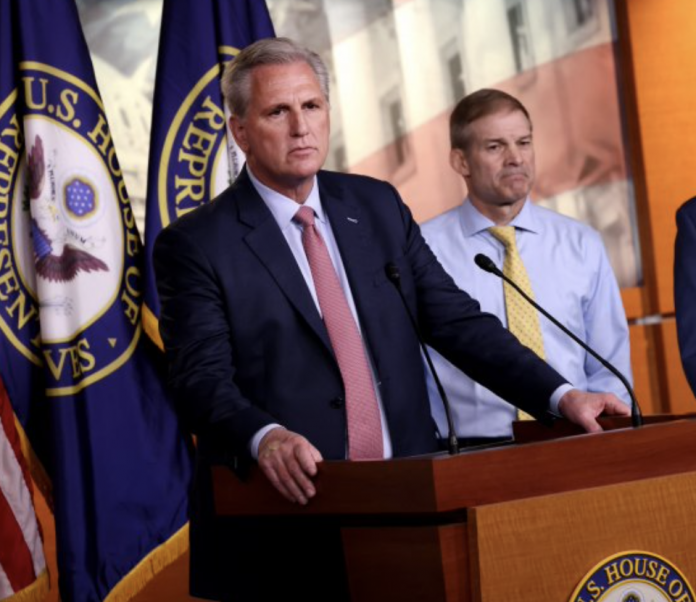 Days ago, Biden surpassed the six month milestone of his presidency. The White House took to different social media sites to flaunt this milestone and talk about how great it’s been for America.

Many Americans beg to differ. Multiple polls this month have come out. These polls reveal that President Biden’s approval rating has fallen to 46%; meanwhile, 52% of the nation disapproves of the job he’s currently doing. Polls have also shown that issues like inflation and higher crime rates are concerning to the country’s voters.

On Thursday, congressional Republicans held a press conference to discuss the policies of the Biden administration thus far. To say that GOP lawmakers are not pleased is a considerable understatement.

House Minority Leader Kevin McCarthy held nothing back during yesterday’s press conference. McCarthy stated that America would be collectively better off right now if Biden didn’t do anything at all since becoming president.

The leading House Republican also referenced on Thursday a poll showing that Americans’ optimism is down by 20%. This prefaced McCarthy noting that with Biden in the Oval Office, Americans are paying more at gas stations, grocery stores, etc.; the House Minority Leader also pointed out that all of this is going on amid higher crime rates.

Numerous Republican lawmakers joined the GOP leader on Thursday. McCarthy’s statements also come amid the Commerce Department’s news that the latest quarterly economic growth is lower than expected. Economists have furthermore predicted that inflation is not leaving anytime soon.

The White House on Thursday made a series of announcements regarding COVID. They informed the nation that they’ll be all for more shutdowns, should the CDC advise it. Biden also informed that he is supportive of forced, mandatory coronavirus vaccines.

Meanwhile, Republicans are coming out in full force against these mandates. Many leaders and voters on the political right believe that enough is enough. Conservatives maintain that letting Americans make their own personal decisions regarding healthcare and COVID is most appropriate.

Thursday’s press conference made one thing abundantly clear; the divides between Republicans and Democrats are perhaps greater than they’ve ever been.