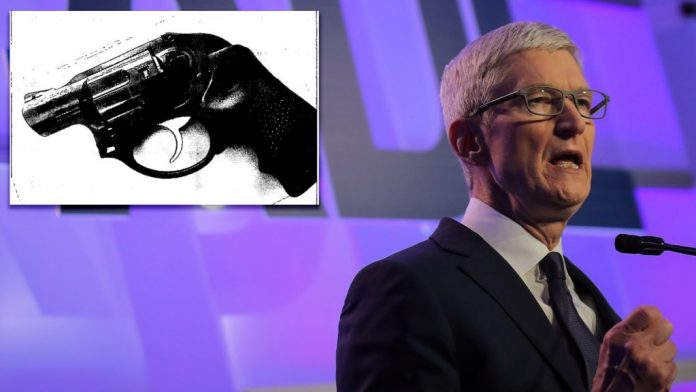 Choi, who also uses the name Julia Lee Cook, has been accused of threatening and stalking the 61-year-old CEO of Cupertino-based tech giant, Apple since October 2020.

The woman allegedly drove from her home in McClean, VA to San Jose. And she rented an Airbnb for an extended stay.

Claiming Cook is her husband and the father of her twins. She appeared at his residence twice. The last time in October 2021 she refused to leave until the Palo Alto police arrived. At the time authorities said she ‘could be violent’.

The restraining order requires the woman to be at least 200 yards away from the house of the Apple CEO and all Apple “workplaces” in the area.

The court order bars the woman from possessing guns. And from approaching any Apple employee including Cook. She is not allowed to enter any Apple property or to get within the 200 yards of Cook’s Palo Alto residence.

Cook’s attorneys filed “Petition for Workplace Violence Restraining Orders” claiming that on Halloween 2020 the harassment began. That’s when Choi opened a Twitter account. And she sent 18 tweets in one day. before the account went dormant.

Calling herself Julia Lee Cook, she took offense at the CEO of Microsoft, Satya Nadella. And tweeted, ‘You should unfollow my husband Tim Cook as soon as possible.’

She also had issues with the CEO of Google, Sundar Pichai. And tweeted that ‘While we two of us reached our love final decision, and in progress, Sandra Pichia, CEO of Google insisting to interrupt Cook’s love and tried to hurt me several times.

‘Julia Lee Cook totally understands my husband’s past and relationships with unexpected parties.’

In another tweet, she declares: ‘My husband, I am not cleaning, cooking, or I am just waiting for my husband! My heart is tingling.’

Choi has continued to tag and threaten Cook on social media. And sent him approximately 200 emails. Some of the emails included pictures of loaded handguns.

Documents filed with the court said the emails demonstrate ‘a significant escalation in tone.’

Cook’s attorney describes ‘threatening and highly disturbing,’ messages that are sometimes sexual in nature.  In 2014, Cook came out as gay.

One of the messages reportedly read: ‘What you have done is criminal defense, murdered.’

‘I warned and told you to stop trying to kill me. You made me to buy this instead of going for Christmas. I will NEVER forgive forget you.’

Choi then began registering several fake corporations. Some of the corporations were described as ‘highly offensive’ in the restraining order.

The fake corporations were opened in California, New York, and Virginia. And they all name Cook as a chief executive officer or a director. And are using his home address or an Apple corporate address.

On December 18, 2021, she emailed Cook saying, ‘we do not have to meet. give me 500 millions cash. then I will forget and forgive all better listen to me.’

She allegedly continued sending Cook messages and emails. And at least one of them is threatening to burn down Cook’s home.

In its application, Apple accused the woman of “erratic, threatening, and bizarre behavior.” The company attached copies of photographs, emails, and tweets that are alleged to come from the stalker.

Apple said in the application that it believes the woman “may be armed and is still in the South Bay Area and intends to return to (Cook’s) residence or locate him otherwise soon.”

The suspected harasser has left her Airbnb and was last seen driving a Porsche.

A hearing is set for March 29.