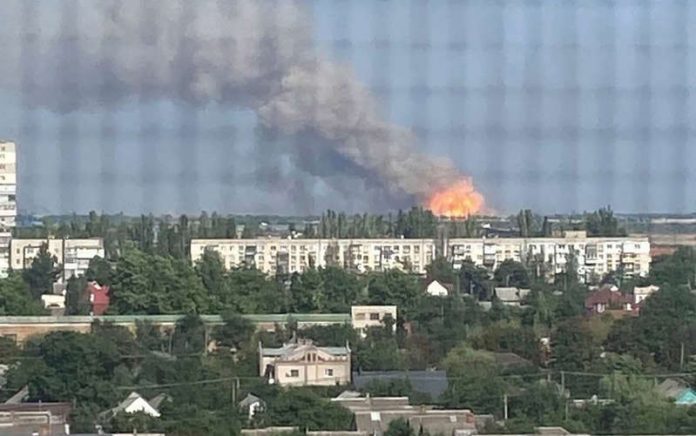 Ukraine is targeting Russian depots using US-supplied Himars missiles and British long-range MLRS weapons. And Vladimir Putin’s forces are facing extreme ammunition shortages as their warehouses are being destroyed ‘one by one.’

Ukraine has been requesting long-range artillery from its allies since they were invaded in February. And the hope is to even up the big imbalance of weapons with Russia. Especially in the Donbas region, Russian forces are taking over town after town. They are primarily bombing civilian targets.

On Friday, US President Joe Biden signed a $400 million weapons package for Ukraine. And that includes four more Himar systems.

"Now we've lost these warehouses one by one," he wrote. "Instead, out of the blue, a wild 'shell hunger' has just been created by the enemy who has mastered new foreign artillery systems and MLRS."

Ukraine’s strikes against Russian command posts and ammo supplies have increased this month since Ukraine has nine Himars on the battlefield.

Igor Strelkov, an ex-commander of rebel forces in the Donetsk People’s Republic, has always had strong ties to Russia.

Strelkov announced on his Telegram channel to his 400,000 followers that “The Russian air defense system turned out to be ineffective against massive strikes by Himar missiles.”

“There have been big losses in personnel and equipment.”

“Now we’ve lost these warehouses one by one,” he added. “Instead, out of the blue, a wild ‘shell hunger’ has just been created by the enemy who has mastered new foreign artillery systems and MLRS.”

According to Russian military blogger Roman Saponkov, Ukraine’s hits on Russian ammunition supplies and Russian command centers (Snake Island) were pinpointed. And could “land on a single penny.”

Russian forces should expect a “hammering” over the coming weeks, a pro-Russian blogger who witnessed a strike reported.

“I’ve been under fire many times, but I was struck by the fact that the whole packet, five or six rockets, landed practically on a penny,” he wrote on Telegram. “Usually, MLRS lands in a wide area, and at the maximum range, it completely scatters like a fan. It makes an impression; I won’t dispute that.”

With their new weapons Ukraine is hitting command posts and other military installations. And they have spent four months gathering all the data to effectively take out the targets they are aiming at.

There has been no comment from the Russian Ministry of Defense on the reported losses. But on Monday it did announce that Russia had struck a Ukraine depot that contains Himar ammunition. So far no one has verified the claim.

Last week, both Ukraine and the United States denied the Russian claim it had destroyed two of the launch vehicles.

Saponkov reassured his readers with claims that “wonder weapons” don’t change the course of a war. And that Russia would develop new weapons and countermeasures.