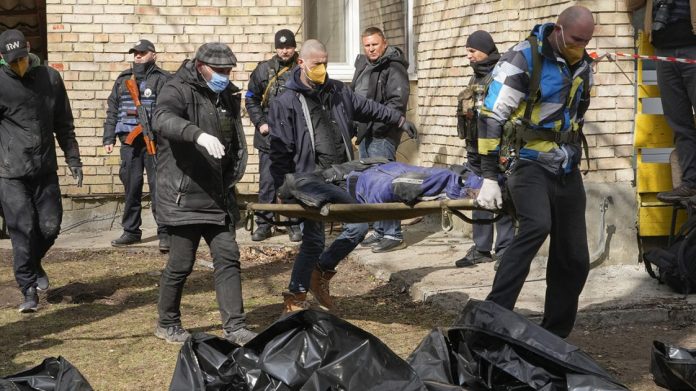 On Monday Ukraine accused a Russian soldier of murder in Ukraine. Mykhailo Fedorov tweeted out a photograph of the Russian special forces soldier. And claims the officer is responsible for several atrocities.

The Russian allegedly killed Ukrainian citizens, then stole from them. And sent their personal items back to his family in Russia.

Here is the officer of russian special forces. He murdered and robbed civilians in Bucha, Irpin, and Hostomel. And now, he is sending all the stolen items to his family at one of BL post offices. There are thousands of them, but we will find every killer. pic.twitter.com/XDpU5mHb2I

Mykhailo Fedorov, Vice Prime Minister of Digital Transformation has been collecting video evidence of the atrocities committed by Russia during its failed invasion of Ukraine.

In a post on Twitter, he outed a soldier seen at a BL post office. “Here is the officer of Russian special forces. He murdered and robbed civilians in Bucha, Irpin, and Hostomel. And now, he is sending all the stolen items to his family at one of BL post offices.”

Fedorov added, “There are thousands of them, but we will find every killer.”

Fedorov specific claims come after Ukraine officials have been touring the suburbs of the nation’s capital of Kyiv. And Ukraine says it is continuing to gather evidence that Russia is committing atrocities in Bucha and other areas.

The war between Russia and Ukraine continues. This week the map changed when the Ukraine ministry of defense recently announced that Ukrainian military forces have regained control of Kyiv. And forcing Russian troops to retreat to the eastern border.

Video evidence of murder in Ukraine

Ukrainian President Volodymyr Zelensky visited Bucha and said, “These are war crimes. And they will be recognized by the world as genocide.”

He added, “We are aware of thousands of people killed and tortured, with their limbs cut off. Raped women, murdered children. I believe this is genocide.”

During the “damage” tour of Bucha Kyiv Mayor Vitali Klitschko agreed with Zelensky. And accused Russia of “genocide” in the region.

Bucha’s mayor Anatoly Fedoruk said in an interview on CNN, “We get the impression that Russian occupiers got the green light from [Vladimir] Putin and the Russian defense minister to have a safari in Ukraine.”

In the meantime, several videos of Russian soldiers sending large shipments of Ukrainian property are going viral.  Ukraine contends that the Russian soldiers are sending stolen items home to their families after they kill Ukrainians and rob them.

On Sunday, United Nations Secretary-General Antonio Guterres tweeted out, “I am deeply shocked by the images of civilians killed in Bucha, Ukraine.”

“It is essential that an independent investigation leads to effective accountability,” Guterres added.

Russia is still claiming that there have been no war crimes or murder in Ukraine. And the video and photographic evidence is faked. But along with the troubling images, there are bodies of Ukrainian citizens. And ultimately that is clear physical evidence that is difficult to fake.