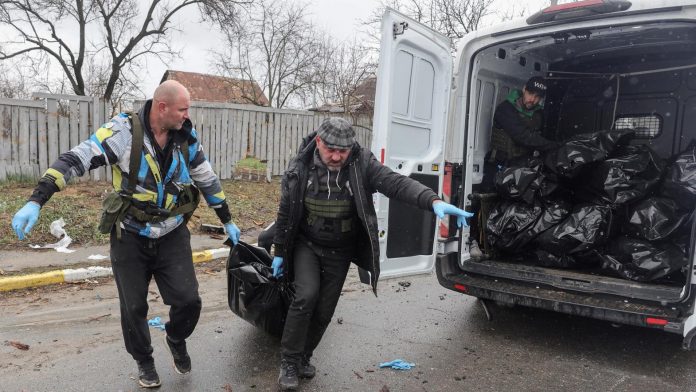 Ukraine President Volodymyr Zelensky visited the town of Bucha on Monday. And is documenting the “atrocities” committed by Russian forces. “We want you to show the world what happened here. What the Russian military did. What the Russian Federation did in peaceful Ukraine,” he said to reporters.

Zelensky, along with reporters and Ukrainian officials toured the northern suburb of Kyiv after the withdrawal of the Russians.

Mass graves and other atrocities

Zelensky described the horrifying state of the town. He said that “dead people have been found in barrels, basements, strangled, tortured.”

Journalists visiting Bucha were shown a shallow mass grave at a church. A layer of red clay was tossed onto the bodies. And hands and feet were still visible.

Reuters news agency reported discovering the bodies of three men wearing civilian clothes. Each one was killed by a headshot. And one man with hands tied behind his back had indications of a close-range shot.

And as different locations were investigated the group found automobiles flattened by the fighting. And a bullet-riddled van marked with the word “deti,” which means “children” in Russian.

Taras Shapravskyi, deputy mayor of Bucha, said that there were 50 victims confirmed so far. All the victims were murdered by Russian soldiers for no reason. The people were killed as the invaders left the area late last week.

Ukraine’s prosecutor general, Iryna Venediktova said that in the Kyiv suburbs the body count stands at 410. But more are being discovered every day.

Zelensky told the press that “It was important for you to see that these were civilians.”

“What you see around, what they did to this modern town, is a characteristic of the Russian military, who treated people worse than animals. These are war crimes, and this will be recognized by the world as genocide,” Zelensky said, according to Ukrainian outlet UNIAN.