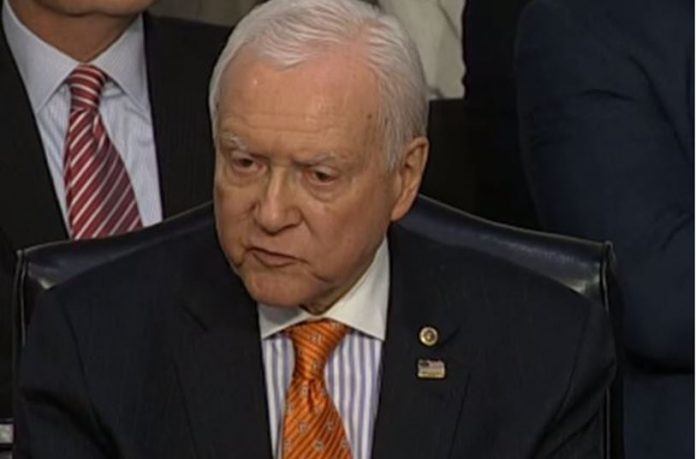 On Friday afternoon, Sen. Hatch released a statement of apology. He explained that his joke about Obamacare supporters does not reflect his actual feelings towards them. He also pointed out that his legislative records show his commitment to bipartisanship and civility.

Senator Hatch has just issued an apology an off-color joke he made yesterday about supporters of the Affordable Care Act. #utpol pic.twitter.com/d1WybXtld3

During a speech at the American Enterprise Institute on Thursday, Sen. Hatch criticized the Affordable Care Act (ACA) popularly known as Obamacare.

The Republican senator said, “We also finally did away with the individual mandate tax that was established under that wonderful bill called Obamacare. Now, if you didn’t catch on, I was being very sarcastic. That was the stupidest, dumbass bill that I’ve ever seen.”

Sen. Hatch continued, “Some of you may have loved it. If you do, you are one of the stupidest, dumbass people I’ve ever met. There are a lot of them up there on Capitol Hill from time to time.”

Additionally, the GOP senator called Obamacare as one of the most “regressive taxes in the tax code. He cited the reason that lower-income families were paying most of the freight.”

Furthermore, Sen. Hatch also described the individual mandate as the “greatest ironies” of the law because it forces people to buy health insurance or pay a tax.

Moreover, the senator emphasized that the GOP tax reform law eliminated the individual mandate. It is a “major step forward in the ongoing effort to repeal and replace Obamacare.”

In an interview with CNN, Senate Minority Leader Chuck Schumer commented that he was surprise to hear Sen. Hatch’s remarks.

According to Sen. Schumer, his colleague is “usually a very polite man.” He believes that Sen. Hatch “sort of lost it” during his speech. He also suggested that the senator from Utah probably was “just frustrated because the American people are against” repealing Obamacare.

In addition, the Senate Minority Leader defended Obamacare. He emphasized that the health care law has “done a lot of good.” He said, “Obamacare is not perfect, but the overwhelming majority of Americans say don’t repeal it, make it better.”

Based on the latest Health Tracking Poll from the Kaiser Family Foundation, 54% of Americans have favorable opinion about Obamacare.