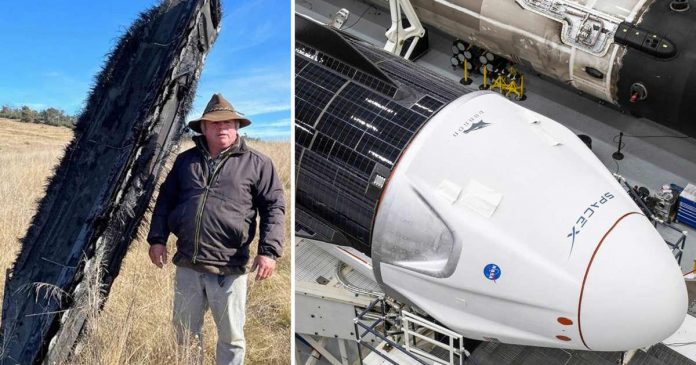 So far, three large pieces of SpaceX rocket debris have been found on a sheep ranch in southeast Australia. The space debris was found in a rural area of Numbla Vale in New South Wales and in nearby Moonbah.

Space debris and junk is equipment or parts of a rocket that is jettisoned into space. It has served its purpose and has only one-time use. The majority of space debris will burn up when reentering the Earth’s atmosphere. And it most often falls in the ocean.

Last year, a malfunction caused a SpaceX rocket stage to have an uncontrolled reentry. And it created an amazing light show near Seattle.  The lights were the space junk burning as it hit the Earth’s atmosphere. And SpaceX rocket debris landed on a farmer’s property in Washington state.

SpaceX rocket debris in the Outback

Last week, Mick Miners was herding his sheep. His property is roughly 5,000 acres and he rides a four-wheeler to manage the 5,500 sheep, 100 cattle and 30 horses on his farm.