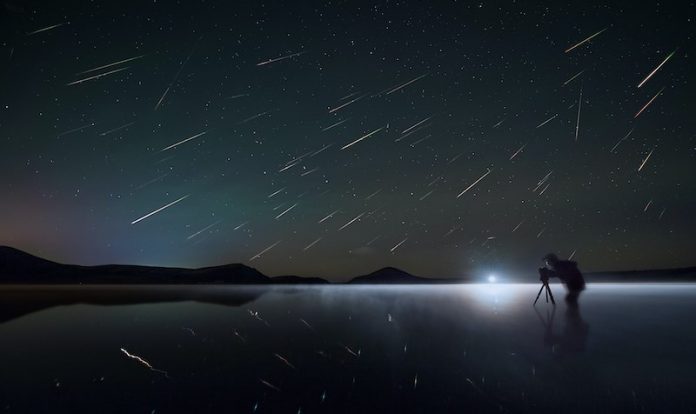 The Perseid meteor shower is an annual event. The 2021 Perseid has been active since July 17. And will continue through August 24. According to the American Meteor Society, peak viewing time in the Northern Hemisphere is August 11th, 12th, and 13th when maximum comet activity is expected.

This meteor system originated from comet 109P/Swift-Tuttle. Every year the Earth moves through the path of debris left behind by the Swift-Tuttle. This debris was created during the comet’s last trip past the sun in 1992. Whenever a comet passes close to the sun it sheds dusty, icy, and rocky debris substances in a stream behind its orbit.

When the comet’s stream enters Earth’s atmosphere it becomes a meteor shower.

This is one of the best meteor showers of the year. A new moon will appear on Sunday, August 8th. This means that the Moon is lost in the glare of the Sun and completely invisible which will darken the skies a few days before the shower’s peak.

Then with the waxing crescent moon on August 12th the moon’s brightness will remain muted.

The Perseids at peak times may have 50 to 75 falling stars per hour. And they can be seen best with clear dark skies. Weather conditions may hide the comets behind clouds. And this year smoke from the massive fires in California and the Pacific Northwest could also present a problem.

Stargazers can check the latest upcoming weather forecasts for their area at weather.gov. 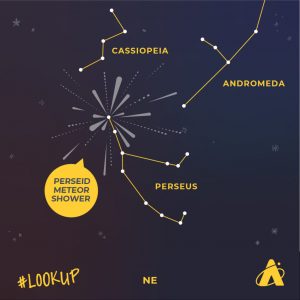 These meteors are called Perseids since the radiant (the area where the meteors originate) is located near what appears to be the origin constellation, Perseus, the hero.

By tracing the Perseid meteors backward, astronomers believe they come from the constellation Perseus. The primary source is the  Double Cluster within the heart of Perseus. In ancient Greek mythology, Perseus is the son of the god Zeus. And his mother was from Earth, the mortal Danaë.